Brexit: Irish food exports to UK may draw €1.35bn tariffs if no deal 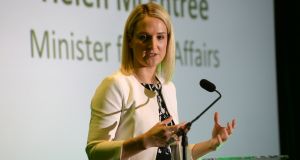 Tariffs on Irish food imports into the United Kingdom would come to about €1.35 billion a year in the event of the no-deal Brexit, Minister for European Affairs Helen McEntee has warned.

“That would have serious implications for those sectors and there will need to be supports put in place,” she told a webinar event hosted by consultancy group PwC.

The new tariff schedule, which would apply to European Union and Irish goods if Brexit talks fail to produce a deal, is roughly equivalent to those charged by the EU on imports from third countries.

The imposition of levies on Irish-UK trade would pose big problems for several sectors here. Most notable of these would be the beef sector which exports 50 per cent of its output to the UK.

Ms McEntee painted a gloomy picture of the Brexit talks, which have remained deadlocked for months and are now running up against a year-end deadline for reaching a deal.

“What the UK is asking for and offering in return is not where we need to be,” she said. “What the UK is being offered is unparalleled access to the single market. But what they are looking for is access to this market [with recognition of their] own qualifications and standards without actually complying to the rules and regulations,” she added.

The Minister further added “it’s unprecedented that a member state, or any other third country, would have access of this level or of this scale without having to take on board some of the rules and regulations that create that level playing field”.

The EU’s negotiating team has accused London of backtracking on commitments made last year. These include pledges to achieve a close economic partnership and co-operation on security and policing.

“There has to be agreement on all areas, it’s not a matter of picking and choosing,” said Ms McEntee.

But Robin Barnett, British ambassador to Ireland, said the UK was seeking a trade deal with the EU similar to those struck by Brussels with the likes of Canada, Japan and South Korea.

In other words, agreements that remove most of the tariffs while not obliging the countries to stick closely to EU rules.

“We all agree on the importance of fair and open competition,” he saidand added that both sides need to strike a fair deal.

With talks at a stalemate, the focus is now on a meeting between UK prime minister Boris Johnson,European Commission president Ursula von der Leyen and the president of the European Council Charles Michel ahead of the next European Council Summit on June 19th.

If negotiations can be progressed then a deal could yet be reached during the German presidency of the EU which starts on July 1st.

If a deal is not concluded, and the transition period not extended, trading with the EU on World Trade Organisation terms would have serious economic implications for the State, particularly if the economy here is still struggling to recover from the coronavirus pandemic.