Dublin city traffic back to 75% of pre-Covid levels

Work to take traffic lanes out of College Green begins 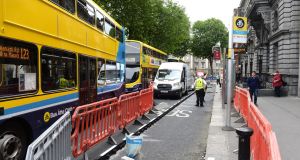 Traffic volumes in Dublin city have returned to 75 per cent of their pre-coronavirus levels, according to new figures from Dublin City Council.

The number of vehicles travelling in and out of the city at morning and evening peak times began to drop rapidly from the first week in March, hitting a low at the end of the month when strict Covid-19 restrictions on travel were introduced.

At that point, when travel was restricted to 2km except for essential reasons and most businesses were closed, traffic volumes fell to just over a third of their normal levels.

However, despite no change to the restrictions over the following month, traffic crept back to more than 40 per cent of normal levels at the start of May.

Since then, peak-time traffic has risen steadily as travel and business restrictions have eased, with the largest jump seen from the start to the middle of this month when most shops in the city centre reopened.

At the end of the first week in June, traffic was at about 60 per cent of its pre-pandemic volumes and by June 21st, it had hit 75 per cent.

The rise in traffic has been matched by calls from the public for a reallocation of roadspace to cyclists and pedestrians.

Since April the council has been gradually implementing a Covid-19 “mobility intervention programme”.

Parking spaces and loading bays have been annexed for pedestrians, and segregated cyclepaths, protected by bollards, have been installed at a number of locations, including the Liffey quays.

The council is also phasing traffic out of College Green. In recent weeks flower boxes were installed in front of the Bank of Ireland on the northbound side of the Green to protect cycling facilities from traffic.

While, on Wednesday morning the bus-stop lane on the opposite side of the road, from Trinity College to Church Lane, has been reallocated for footpath space. Buses will now stop in what is an existing traffic lane, leaving one lane for traffic.

More than 700 requests for “mobility measures” including footpath widening, more space at bus stops, segregated cycling facilities, and contraflow cycle lanes have been made to the council since April.

Meanwhile councillors were told on Wednesday it would take 100 years to resurface the city’s roads at the current levels of investment.

Over the same period road construction costs have increased by 50 per cent.