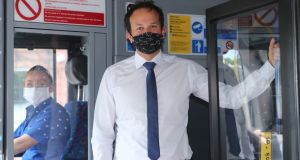 Masks are to become mandatory on public transport as the Government moves to increase capacity on bus, train and Luas services as more people return to work.

Minister for Transport Shane Ross is set to bring the compulsory mask proposals to Thursday’s Cabinet meeting. Ministers have insisted masks will become more important as coronavirus restrictions are lifted. The two metre social distancing rule for public transport operators will cease to apply and, instead, operators will be allowed to run at 50 per cent capacity.

Mr Ross, in what is expected to be the Government’s last Cabinet meeting, will recommend that regulations be changed to enforce the new rule.

The issue was discussed at a Cabinet sub-committee meeting on Wednesday and it is expected the mandatory mask rule will take effect in the next week or two.

The Government is also set to move to open “air bridges” between Ireland and other countries which have brought coronavirus under control. This would allow for the two-week quarantine period to be lifted for those arriving into Ireland from such areas – allowing Irish tourists to go on foreign holidays to certain destinations.

It is not yet clear if the “air bridges” will apply only to countries within the EU or for those outside it too. It is expected the changes will be brought in from July 9th. While no decision has been taken about easing the two metre rule at airports, one source said: “It is not really working now.” Ministers are also expected to provide a bailout for Shannon Airport.

Meanwhile, an infectious diseases consultant will on Thursday warn the Oireachtas about a second wave of Covid-19 and call on the Government for greater investment over the coming weeks “to rapidly upscale in emergency department capacity and isolation room facilities”.

Prof Paddy Mallon from St Vincent’s Hospital and UCD will tell the Covid-19 special committee that as society reopens, the public is handing back some responsibility for controlling the virus to the State and if the programme of testing and tracing “fails to work effectively, we risk losing the gains provided to us through the sacrifices of the Irish people”.

He will say there is “a very narrow window of opportunity” to learn from the lessons of the first wave and that this time must be used “wisely to improve our infrastructure”.

The HSE’s chief clinical officer, Dr Colm Henry, will tell the committee a critical project for a new model of contact tracing and testing that will operate for the next 18 months will have a target implementation date in late August.

Meanwhile, the Minister for Education said a summer programme would reopen next month for children with special needs without any requirement for strict social distancing. This move is seen as a significant trial run for the full reopening of all schools in the autumn.

Elsewhere, Garda Commissioner Drew Harris said the Garda had “found itself again” during the pandemic because gardaí were freed from a range of “ancillary tasks” that always fell to the force but which had “nothing to do” with its official role. “There are functions we should be shedding,” he told the Policing Authority on Wednesday.

‘Draconian’: TDs from across Midlands shocked and angered over lockdown 20:12
Workers diagnosed with Covid-19 or certified to self-isolate can claim special illness benefit 19:52
Main points: What restrictions have been imposed on Kildare, Offaly and Laois? 19:43
Warning of ‘economic meltdown’ in Kildare 19:28
Midlands lockdown: Movement restrictions in place for residents of Kildare, Laois and Offaly 19:22