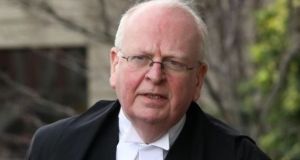 Former minister for justice and attorney general, Senator Michael McDowell has described the suspected arson attack on a car outside the house of Sinn Féin TD for Sligo-Leitrim Martin Kenny as “disgusting and anti democratic.”

“It was absolutely abhorrent that he [Kenny] and his family had to live in fear because of cowardly people who appeared to have an ultra right agenda, Senator McDowell told Newstalk Breakfast on Tuesday.

Mr McDowell said the attack was “ an attack on every deputy in Dáil Éireann.”

This was a threat of personal violence by “very undemocratic forces” because of something Mr Kenny had said, Mr McDowell added.

Mr Kenny has supported a proposal to accommodate asylum seekers in Ballinamore, Co Leitrim where a local community group has mounted a round the clock silent protest in opposition to the plan.

Last week Mr Kenny, who has criticised “fearing mongering” and the whipping-up of hysteria in the debate about immigration, said he had received a death threat and a number of vile messages.

A Garda spokesman said the investigation was at an early stage and no motive had been identified.

However, a Garda source said Mr Kenny’s support for asylum accommodation in Ballinamore and a subsequent death threat “form a definite line of inquiry,” but said there is no evidence pointing towards a particular individual or group.

Last week, Mr Kenny said “some people in this country peddle far-right ideology” during Dáil exchanges on asylum seekers. Later, he said he had received a death threat and a number of vile messages.

Senator McDowell said when people become involved in politics they do so with the mandate of the people who elect them.

There were a number of people who were constantly using fear of “the great replacement” warning Ireland was about to be annihilated “by a wave of people taking over the country,” he added.

he described this as a dangerous line of thinking.

Existing laws need to be enforced and legislation that was being planned 12 years ago when he was minister about speeding up the asylum application process needed to be completed, said Senator McDowell.

“People are still in limbo. We have to have a simplified system.”

The Senator said he agreed with the parish priest of Ballinamore Fr Sean Mawn who said it was time for local people to review their decision to have a round-the-clock protest.

Fr Mawn also condemned the apparent arson attack on Mr Kenny’s car as a “despicable act which has no place in civilised society” but he stressed this “thuggery” was, he believed, separate to the ongoing protest.

“The law of the land has to be upheld. No one has the right to burn a car as a threat. People have to sober up. When we established an independent Ireland, it was a democracy based on the rule of law.”

He said there was no excuse to deviate from the rule of law or to engage in thuggery or in making threats against other people.