The European Union has agreed to a three-month flexible 'Brextension' but the British parliament rejected Prime Minister Boris Johnson's bid to end the political paralysis with a Dec. 12 election. Video: Reuters 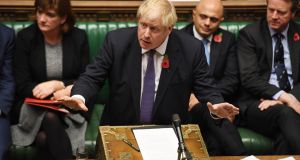 Britain was on Monday night on course for a December general election after British prime minister Boris Johnson abandoned plans to push his Withdrawal Agreement Bill before voters go to the polls.

The prime minister failed on Monday to win the necessary two-thirds majority for an early election under the Fixed-Term Parliaments Act. However, opposition parties signalled they could support a Bill on Tuesday that would bypass the Act to give the go-ahead to a December poll.

“The house cannot, any longer, keep this country hostage,” said Mr Johnson. “I don’t believe this paralysis and stagnation should be allowed to continue.”

The new Bill to authorise an election requires only a simple majority and unlike Monday’s motion it can be amended. Downing Street sources said on Monday night, however, that a December 9th election would mean a dissolution of parliament within days, and would not allow enough time to pass a Northern Ireland budget Bill that is needed to keep public services running.

Labour leader Jeremy Corbyn, whose party abstained in Monday’s vote, said he did not trust Mr Johnson, but that he could support an early election once he was certain that there was no risk of a no-deal Brexit.

“We will obviously look at and scrutinise that Bill. And we look forward to a clear, definitive decision that no deal is absolutely off the table and there is no danger of this prime minister not sticking to his word – because he has some form on these matters,” he told MPs.

Mr Corbyn also warned that an election on December 12th could disenfranchise third-level students, for many of whom the term ends the following day.

Earlier on Monday the EU agreed to accept the British government’s request to delay Brexit until January 31st, 2020, but said Britain may leave on the first of any month until that date once the withdrawal agreement is ratified by the Commons.

Mr Johnson, who won the Conservative leadership contest pledging to deliver Brexit on October 31st “do-or-die”, was forced by MPs to request a delay to ensure Britain could not leave the EU without a deal.

France worked with Ireland, Germany and officials of the European Council over the weekend to frame the terms of the extension. The declaration “firmly” excludes any reopening of Brexit talks in the future.

In answer to a question from the DUP’s Ian Paisley on Monday, Mr Johnson said he would campaign in any forthcoming election for a mandate for the deal he agreed with the EU earlier this month.

The DUP abstained in Monday’s vote.