Threat of loyalist violence ‘not an argument’ against united Ireland

The 50 per cent plus one rule must apply in any poll on unity, says Queen’s law professor 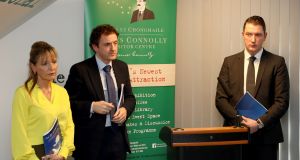 Sinn Féin MEP Martina Anderson, Prof Colin Harvey of Queen’s University Belfast and Cllr John Finucane at the launch of their paper on the role of the EU in Irish unity. Photograph: Laura Davison/Pacemaker

A threat of violence must not be an argument against any future referendum on a united Ireland being decided by a simple majority vote, even if it is 50 per cent plus one, a leading Belfast academic has said.

Prof Colin Harvey said the 50 per cent plus one majority rule, as contained in the Belfast Agreement, must apply in any future Border poll when he spoke at the launch of a new publication, co-authored with barrister Mark Bassett, arguing the case for a united Ireland.

“The threat of violence is not an argument and it’s not an argument that I will entertain or listen to,” he said at the launch of The EU and Irish Unity – Planning and Preparing for Constitutional Change in Northern Ireland. The paper was commissioned by the Sinn Féin group in the European Parliament.

Some people, including former SDLP deputy first minister Seamus Mallon, have expressed concerns that a narrow majority for a united Ireland could lead to loyalist violence.

Prof Harvey, however, rejected this argument.

“People in this room and beyond this room have a right to engage in this conversation, and they are going to continue to engage in it. And people using the threat of force in 2019, it has no place in the conversation,” he said, at the launch in the James Connolly Visitor Centre in west Belfast on Monday.

“Nobody has any illusion about how change can make people anxious and worried, but I think that those who are arguing to change the voting rules in relation to that are wrong. I think it is 50 plus one in terms of whatever way that goes. That’s the rules,” he said.

He said the focus should be on providing reassurance that in the event of constitutional change “all communities and all individuals will feel comfortable and welcome in the new arrangements that emerge”.

“The emphasis needs to be on the reassurances and not on gerrymandering the new requirements,” he added.

Prof Harvey, from the school of law of Queen’s University, Belfast, said he did not underestimate legitimate concerns about the threat of violence. He said the focus should be on ensuring whatever concerns people had should be addressed.

“One of the central aspects of our report is to highlight the fact that the rights of British citizens at the far end of Brexit are going to have to be properly looked after and protected in any constitutional future,” he added.

In terms of the overall debate he said: “We are the responsible people in the room who care about the future of this island. Those people who feel that we should put our heads in the sand, that we should not talk about this, who use words like ‘divisive, dangerous and provocative’, are the people who are being irresponsible in the context of what they are facing.”

Prof Harvey also said that unification could provide a “pathway” back for Northern Ireland into the European Union should Brexit finally happen.

He said the “unity debate was gathering remarkable momentum”, was “being normalised” and was a “mainstream part of the conversation on the island of Ireland and actually on these islands and beyond right now”.

MEP Martina Anderson of Sinn Féin, which is aligned with the European United Left-Nordic Green Left group in the European Parliament, and which commissioned the report, said things had changed in Northern Ireland and it was “right that we prepare and plan for constitutional change in Ireland”.

In the 84-page report, Prof Harvey and Mr Bassett argue that there is nothing in the Belfast Agreement “or in the EU’s own legal order that prevents [the EU] from playing a strong part in supporting and assisting a managed transition over time to reunification, if that is the democratically expressed choice of the people of Ireland”.

“The facilitation of Irish unity, pursuant to the GFA [Good Friday Agreement], and consistent with democratic principles and international law should be a priority for the EU,” they state in the publication.