All 34 local authorities to sign charter to pursue ‘green’ agenda

They will have to put in place process for carbon-proofing major decisions and projects, including investments in transport and energy 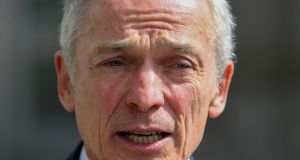 Richard Bruton: “I am determined that government, both at central and local level, will lead the way in our response to the climate challenge”

All 34 local authorities in Ireland are to sign a charter on Tuesday committing to decarbonising their activities, pursuing sustainable development and “building climate resilience into every aspect of the work they do”.

On specific commitments, they will be required to deliver a 50 per cent improvement in energy efficiency by 2030, and ensure suppliers provide information on their carbon footprint and on planned steps to reduce it. They must also adopt “green procurement”, factoring in environmental benefits in considering contracts they award.

They will be required to put in place a process for carbon-proofing major decisions, programmes and projects, including investments in transport and energy. The charter underlines local authorities’ leadership role “locally and nationally” in delivering effective climate action.

While some measures may be considered aspirational, and targets – where they exist – are long term, local authorities will have to monitor, evaluate and report annually on implementation of activities under the charter.

There is no indication of possible penalties, such as withdrawal of central government funding for inaction or failing to meet targets.

The Minister for Climate Action Richard Bruton noted that Irish emissions were currently not where they need to be – ie reducing across all sectors based on international commitments for 2020 and 2030. The charter, however, commits to measures which reduce carbon emissions “in line with national objectives”.

“Last year’s emissions figures [released last week] show we do not have time to waste. We must drive forward the actions in the climate action plan. Only through consistent, sustained action can we deliver the step change that is needed,” said Mr Bruton.

The charter is a key measure in the Government’s climate action plan.

“The public sector leading by example is a central pillar...I am determined that government, both at central and local level, will lead the way in our response to the climate challenge.”

He, with Minister of State Sean Canney, will sign the charter with the local authorities committing local government to “driving forward meaningful climate action in their communities, through actions set out in the plan”.

The plan is designed to ensure Ireland meets its 2030 climate commitments while putting the country on a trajectory to have net-zero emissions by 2050.

Separately, local authorities have to play a major role in adaptation; building resilience in response to increased threats of extreme weather and providing infrastructure to counter flooding.

Given their pivotal role across the sectors of planning, housing, transport and waste and their close relationship with the community, local authorities “have a crucial role in implementing the step change that is needed and influencing many more to address this challenge”, said Mr Bruton.

“Local authorities are a focal point for our communities, villages, towns and cities, and their support for this charter reflects the whole-of-society approach we need to take to transform our economy from brown to green,” Mr Canney said.

County and City Management Association chairman Michael Walsh said local authorities “have huge ambitions for what we can achieve in the area of climate action”.

“We are already making significant progress; councils around the country are cutting the carbon footprint of our internal operations, making our housing stock more energy efficient, prioritising climate considerations in development planning and actively engaging our communities on climate issues,” added the chief executive of Waterford City and County Council.