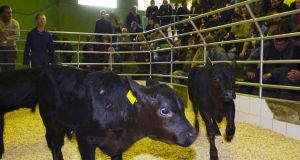 An Irish agri-software company has welcomed the Government decision to allow marts resume trading amid the Covid-19 pandemic, saying its software can create a virtual mart online and avoid crowds attending.

Livestock-Live was developed by Irish entrepreneur Brendan Hannigan who said his software is an ideal fit with what the Department of Agriculture is seeking to do in allowing marts to reopen.

On Tuesday, the department announced that marts, which handle about 1.7 million cattle sales and 1.5 million sheep sales annually, are to be allowed to reopen following their closure last week. They will be able to provide a limited range of services to facilitate the sale of livestock building up in farms during the calving season.

Marts will be allowed to match buyers and sellers, weigh animals and oversee sales but there will be no public auctions and no crowds attending the mart premises, according to the department. It said marts had to show they were able “to operate in full compliance with HSE guidelines in relation to hygiene and physical distancing” and they could explore “using information technology solutions to assist in facilitating sales”.

Mr Hannigan said the software developed by his company, which is headquartered in Mullingar, Co Westmeath, allows farmers to buy and sell animals online. He said Livestock-Live has been developing the software for the past five years and last week it was trialled at Carnaross Mart in Co Meath with good results.

“It is now possible to have virtual auctions that are physically closed to the public but are open online to buyers and provide realtime bidding information to farmers.”

Mr Hannigan said the Livestock-Live farm management app is free to farmers and the mart is charged a small commission.

“It enables the marts to get back up and running as quickly as possible. We already have the system installed in Carnaross and Gortatlea in Tralee and Manorhamilton in Leitrim but we could roll it out nationally within weeks.”

IFA national livestock chairman Brendan Golden welcomed the move to allow marts come up with alternative mechanisms for the sale of calves, cattle and sheep.