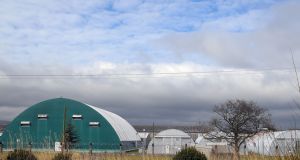 A section of a British army base in Co Down is to be prepared as a mortuary as part of the North’s Covid-19 planning. Photograph: Alan Lewis - Photopress

Up to 3,000 people could die of coronavirus in the North in 20 weeks, according to estimates by the Department of Health.

Under “reasonable worst-case scenario” modelling, the peak of the first wave of the coronavirus epidemic is expected between April 6th and April 20th. During this peak it is expected that each week there would be 500 hospital admissions, and 180 patients with Covid-19 would require ventilation and critical care beds.

The North’s Health for Minister, Robin Swann, also warned that in the absence of a vaccine there would be a “second wave” of coronavirus cases once current restrictions on movement were reduced.

The deaths of two further patients with coronavirus were recorded in Northern Ireland on Wednesday, bringing the total number of deaths to 30. There were 103 new confirmed cases of coronavirus.

The total number of confirmed cases is now at 689, with 200 of those in Belfast.

The figure of 3,000 is significantly less than the “worst-case nightmare scenario” of up to 15,000 deaths, which Mr Swann warned of two weeks ago.

On Wednesday he said the modelling indicated that the health service in the North “would have a realistic prospect of coping in this initial period if a sufficient proportion of the population adhere to the social distancing and self-isolation measures”.

However, he said there was “no grounds whatsoever for dropping our guard”, and the projections “underline that the continuation of rigorous social distancing will save many lives and protect our health service from collapse”.

“Even then a reasonable worst-case scenario would involve significant loss of life in Northern Ireland,” he said.

Speaking during the daily press briefing at Parliament Buildings in Stormont, the first minister, Arlene Foster, said the statistics were “sobering” and under this scenario “the death toll would be about 500 people of short of the lives lost in the Troubles.”

The figures, she said, “underline the importance of members of the public adhering to public health advice.”

Speaking on BBC Radio Ulster’s Talkback programme, the chief medical officer, Dr Michael McBride, said he was “as certain as I can be” that the North would have sufficient ventilators to cope with the peak.

He said 165 were currently available, and there were “significantly more on order and we anticipate our share of the UK consignment...somewhere in the region of 190 ventilators to be with us in the very near future”.

Dr McBride also said that while there was “much talk about the differences on the approach to strategy on a North-South [basis], there is to my mind absolute unanimity of approach in terms of the steps that have been taken”.

He said both sides of the Border shared a common purpose and a common enemy in the coronavirus.

“There is more in common across our plan than is actually different, but there are nuanced differences in terms of timing, in terms of how the epidemic is behaving, and we will continue to be guided by the best available advice that we have available to us.”

The Department of Health’s “reasonable worst-case scenario” modelling is based on a number of assumptions, which include that social distancing measures produce a 66 per cent reduction in contacts outside the home and workplace, and that 70 per cent of symptomatic cases adhere to isolation.

“The modelling team authors emphasise that the work is not a prediction or forecast, rather a model for planning purposes,” the department said.

It also stated that “it is assumed that current restrictions remain in place for the foreseeable future”.

“This will remain the case until there is substantial population immunity either as a result of recovery from infection or successful vaccination.”

Leaving Cert students must register for calculated grades by Thursday evening 19:04
Man admits rape of boy after drugging him with pain relief substance, court told 18:54
Tributes paid to Ireland’s deputy ambassador to China who died on Sunday 18:28
No acting the goat when it comes to cleaning up Cork graveyard 18:26
Man jailed for three years for ‘barbaric’ circumcision without anaesthetic 18:18