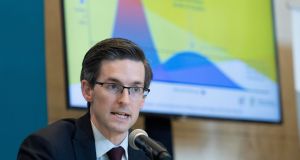 Ten of those who died were located in the east and four were in the south. The deceased patients were seven women and seven men. Of the 14, eight were reported as having underlying health conditions.

There have now been 85 Covid-19-related deaths in Ireland. The median age of those who died was 82.

Meanwhile, the Health Protection Survelliance Centre has been informed of 212 new confirmed cases of Covid-19 in Ireland, as of 1pm on Wednesday.

This brings the number of confirmed cases of Covid-19 here to 3,447.

For the first time, the Chief Medical Officer Tony Holohan, who normally leads the media briefing for the National Public Health Emergency Team, was not present.

He was admitted to St James’s Hospital for tests having complained about feeling unwell on Tuesday night. It is understood the health complaint is unrelated to the Covid-19 outbreak, and thus social isolation protocols might not be necessary

Assistant chief medical officer Dr Ronan Glynn said he would be back at work on Thursday.

According to an analysis of cases up to Monday, women outnumber men slightly among reported cases - 50 per cent to 48 per cent. The median age of confirmed cases is 48 years.

So far in this epidemic, 834 patients have been hospitalised and, of these, 126 have been admitted to ICU.

Community transmission now accounts for 60 per cent of cases, the highest level recorded to date. Close contacts account for 21 per cent and travel abroad for 18 per cent.

Some 134 clusters have been identified, each involving an average of under five cases.

From this week, contact tracing for all confirmed cases is to cover the period of 48 hours before symptoms show; this reflects increasing evidence of asymptomatic transmission of the virus.

Contact tracing is also being expanded to embrace people with suspected Covid-19 who are waiting for tests, officials said.

Asked whether the number of cases being reported daily was lower because of reduced testing, Dr Glynn acknowledged “at present we’re not carrying out as many tests as we would like” due to equipment shortages. “If we were, we’d pick up more people, but that doesn’t mean the picture in terms of patients hospitalised would be any different. They’re the figures we’re most interested in.”

In Northern Ireland, the deaths of two further patients with coronavirus were recorded on Wednesday, bringing the total number of deaths there to 30. There were 103 new confirmed cases of coronavirus in the North.

The total number of confirmed cases in Northern Ireland now stands at 689, with 200 of those in Belfast.

The North’s Department of Health has warned that up to 3,000 people could die of coronavirus in Northern Ireland in 20 weeks.

Under “reasonable worst-case scenario” modelling, the peak of the first wave of the coronavirus epidemic in Northern Ireland is expected between April 6th and April 20th. During this peak it is expected that each week there would be 500 hospital admissions, and 180 patients with Covid-19 would require ventilation and critical care beds.

The North’s Minister for Health, Robin Swann, also warned that in the absence of a vaccine there would be a “second wave” of coronavirus cases once current restrictions on movement were reduced.

He said there are 2,200 beds available currently plus the 2,000 beds that are coming on stream from the private hospital system. There will be a further 3,000 bed facilities coming on stream after this, he said on Wednesday morning.

He was visiting the new Citywest facility with Taoiseach Leo Varadkar and Minster for Health Simon Harris where more than 1,000 beds are being made available for those who need to self-isolate. This will free up vital hospital beds by giving those not well enough to return home a step down facility.

Mr Varadkar warned that there will be further “bumps in the road” amid pressure on the testing system. Around 1,500 people are being tested per day for Covid-19, which is below target, and a shortage of reagent is slowing lab testing of the samples taken.

The Taoiseach cautioned that it could be next week before additional reagent is sourced.

“I fully appreciate the anxiety and worry it has caused to people who are waiting to have their test and who are then waiting for the result. We expect to have more reagents probably next week but then there may become a shortage of something else and we need to be frank with people.

“While we might overcome one problem, another will probably come along after that. The truth is this is a global pandemic, there was no handbook or road map for dealing with this. We are dealing with this from day to day.”

Mr Varadkar said the increased work in contact tracing will “in some way to make up for the fact that there are delays in getting the test results.”

In terms of intensive care capacity, Mr Reid said no hospital has yet reached its limit while the Taoiseach said the latest figures showed there were 120 people being cared for in ICU.

Meanwhile, public health officials are to step up efforts to tackle coronavirus outbreaks in nursing homes and hospitals in response to a large increase of clusters of the disease in residential settings.

Among the measures expected to be introduced are increased availability of personal protective equipment (PPE) and health checks for nursing home staff.

Outbreak teams are to be set up to combat specific clusters of the disease, and the Health Information and Quality Authority and the Mental Health Commission are to risk assess residential institutions.