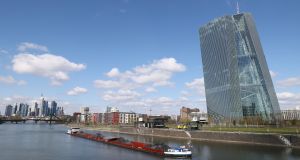 The European Central Bank (above), after an early communications lapse, has come forward with a massive programme of bond buying which, it is hoped, will help countries raise money at low interest rates. Photograph: Kai Pfaffenbach/Reuters

Europe’s initial economic response to the coronavirus crisis has been a mixed bag. The European Central Bank, after an early communications lapse, has come forward with a massive programme of bond buying which, it is hoped, will help countries raise money at low interest rates. EU governments, however, ended up in a damaging row last week about whether centrally guaranteed bonds – so-called eurobonds – should be issued as another response to the crisis.

This row has the potential to fester and cause real damage in the months ahead. The euro zone’s finance ministers have been asked to examine where to go next, and they need to make progress.

It seems some lessons have been learned from the financial crisis which started in 2008 and some have not. Then, the ECB’s slowness to react did real and lasting damage. This time it has moved swiftly. But economic and monetary union is not a completed project and some of the wounds from the last crisis are being reopened as governments squabble.

The ECB action is a vital support for many countries, including Ireland. However, the scale of the crisis means more may be needed, not only to pay the immediate bills but also to fund the recovery. Jointly raising funds on the markets – meaning all countries could have access to money at the lowest possible interest rate – would be an important political as well as economic move. It would show solidarity to those worst affected, notably Italy.

It remains a controversial proposal despite the support of nine euro zone members, including France and Ireland. A group of northern European countries, including Germany and the Netherlands, remain opposed, the latter vehemently. They argue that the European Stability Mechanism – the ESM – can provide credit lines if needed to countries which can’t get access to funds.

The way forward may involve a recognition by those looking for centrally guaranteed financing that some structure and conditions will be involved. But it also requires an acceptance by the richer northern countries of the huge economic benefit they get from the EU and the need for solidarity against an extraordinary economic threat.

There are various ways that cheap funding could be made available to countries which need it. France has proposed a time-limited special fund with some borrowing powers. Leveraging the ESM’s financial firepower may be part of the answer, too.

An extraordinary economic threat has arrived. If Europe’s leaders go for the kind of piecemeal solutions they gradually adopted during the financial crisis, it will be too little, too late. A crisis which has hit with unprecedented speed needs a quick and decisive response and it cannot all be left to the ECB.