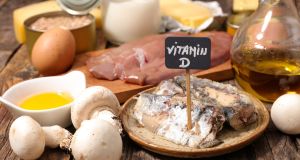 It is important to eat foods high in vitamin D and to get adequate sunlight to avoid osteoporosis.

A Donegal GP has said vitamin D test results coming from Letterkenny University Lab have been so low scientists first thought the machines were not calibrating properly.

Dr Martin Coyne blamed severe lack of sunshine in the county for low vitamin D levels and a high number of people suffering with osteoporosis.

“We’re located further north in Donegal, so we see less sunshine here. In the winter, even if it was cloudless and you lay out naked in the sun, you wouldn’t get enough vitamin D,” he said.

Dr Coyne, who has a special interest in osteoporosis, examined the first 10,000 vitamin D test results from Letterkenny University Lab. He found 75 per cent of samples tested had insufficient vitamin D levels and 12 per cent were extremely low. This compared to a study of older adults across Ireland which showed 12.5 per cent were deficient.

“The results were frightening,” Dr Coyne said. When Dr Coyne presented the test results to the lab manager, levels had to be rechecked to ensure the high number of vitamin D-deficient patients was accurate and the machines had not miscalculated.

Low levels of vitamin D are one of the leading causes of osteoporosis, which affects an estimated 300,000 people in Ireland. It causes bones to become weak and brittle, leading to fractures.

One in five men and one in two women over the age of 50 will develop a fracture in their lifetime due to osteoporosis.

Research by the Irish Osteoporosis Society shows the number of people suffering with the disease is increasing year on year due to people living longer, exercising less, and poor nutrition, particularly an inadequate daily intake of vitamin D and calcium.

It is a silent, painless disease until a fracture occurs. It is most common in postmenopausal white women but it can occur at any age in both males and females, and persons of all races.

“Some fractures can even be asymptomatic. But once you have a fracture, you’re at risk of having several more, so prevention is key,” Dr Coyne said.

Older people are more at risk of osteoporosis for several reasons. Older skin cannot manufacture vitamin D as well as younger skin and elderly people tend to spend more time indoors which means they exercise less and are not exposed to enough sunshine. Even elderly people who retire to warmer climates later in their lives may still be at risk of developing osteoporosis.

Also contributing to the large number of patients suffering with osteoporosis is sensitivity to gluten, found commonly in foods such as pasta and bread. If a person continues to eat food they’re sensitive to, it can inhibit the absorption of nutrients, which causes bone loss.

Due to symptoms often going unnoticed, the diagnosis rate of osteoporosis in Ireland is only 15 per cent. This leaves approximately 280,000 people undiagnosed.

“The diagnosis rate is appalling. It is costing the taxpayer millions,” the spokeswoman said.

“People very frequently look to be tested for vitamin D so there is certainly an awareness there,” Dr Coyne said. However, he said some GPs around the country don’t prioritise vitamin D testing because it’s an expensive test. Likewise, the Health Service Executive does not recommend laboratory testing for vitamin D as a general “screening” test.

When it comes to prevention, the Irish Osteoporosis Society recommends 15 minutes per day of sun exposure without sunscreen. This can be broken up into three sets of five minutes.

Very few natural foods contain vitamin D. Oily fish, including salmon, tuna, and mackerel are recommended. “But farmed fish contains much lower levels of vitamin D,” Dr Coyne said. “And most of our fish here in Ireland is farmed.”

Vitamin D can also be found in foods such as fortified dairy products and eggs. Dr Coyne recommended people take a fortified milk to boost levels.

If a person is dairy-intolerant or dislikes certain foods that contain vitamin D, the ISO encourages them to take supplements instead. Many patients find it easier and less stressful to get their daily vitamin D from supplements rather than focusing heavily on getting it through their diet alone.

Exercise is also important in preventing osteoporosis. Weight-bearing exercise, such as walking, jogging, and climbing stairs, is considered by experts to be especially effective. The recommended weekly activity is 150 minutes for all older adults.