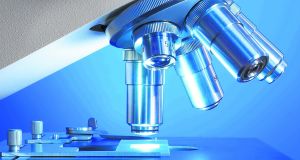 MedLab cleared its 55,000 backlog of slides last week, the company confirmed on Sunday, and is no longer carrying out work for CervicalCheck.

Women may once again have to wait longer to have their smear tests examined under the State’s cervical cancer screening programme following the exit of the main Irish-based laboratory from the programme.

The capacity available to CervicalCheck to process tests has been greatly reduced after MedLab Pathology, based in Sandyford, south Dublin, completed its work for the programme last week.

Since May 1st, MedLab has focused exclusively on clearing its share of a massive backlog in the programme, which at one point was causing delays of more than 33 weeks in providing smear test results to women. Since then, the Health Service Executive contracted another lab, Quest Diagnostics, to expand its work for the programme by processing new slides that would formerly have been dealt with by MedLab.

MedLab succeeded in clearing its 55,000 backlog of slides last week, the company confirmed yesterday, and is no longer carrying out work for CervicalCheck. Its work over the past three months explains the fall in the overall backlog in recent months, from 81,000 in March to 28,000 last week.

Despite the fall in overall numbers on the waiting list, the waiting time for results appears to be edging up. Last week, the HSE said it was taking up to 14 weeks and, in some cases, longer for women to get their smear test results, an increase from 13 weeks reported in April. Quest, based in the US, is now responsible for processing 90 per cent of CervicalCheck slides. However, there have been a number of IT-related controversies affecting the scheme recently.

A lab at the Coombe hospital in Dublin processes 10 per cent of the slides but sources say the speed at which it can handle these tests has greatly reduced since the High Court ruling in the Ruth Morrissey case last May.

Mr Justice Kevin Cross’s finding that screeners must have “absolute certainty” before giving a smear the all-clear has caused widespread concern among those involved in screening, who say it imposes a standard for negligence that is incompatible with a screening programme. An appeal by the State, Quest and MedLab will be heard by the Supreme Court in November.

The HSE said last week the labs were making “steady progress” in processing all outstanding tests.

MedLab’s Sandyford facility continues to handle private work as well as testing samples for other screening programmes, including BowelScreen, but the end of its decade-long association with CervicalCheck is likely to lead to layoffs.

The backlog for processing CervicalCheck tests is largely due to a Government decision last year to provide women with free out-of-cycle smears. This was done to allay women’s fears after it emerged last year that hundreds of women with cervical cancer had not been told of a retrospective audit of their earlier smears.

The decision continues to have repercussions in the system, most recently in the form of increased pressures on the State’s 15 colposcopy units. The HSE has been unable to say how long women whose smear tests show cell changes are having to wait to be seen for colposcopy.