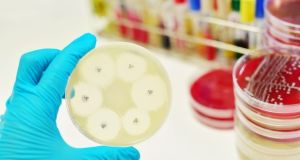 HSE director general Paul Reid said more than 1,000 people in Ireland are carrying the most dangerous superbug, CPE, which is resistant to almost all antibiotics. Photograph: iStock

Mr Reid said more than 1,000 people are carrying the most dangerous superbug, CPE, which is resistant to almost all antibiotics. If the number of CPE cases continues to increase, the health service will move closer to a “tipping point beyond which effective control is impossible”, he added.

The warning is contained in a briefing note on the related challenges of antimicrobial resistance and healthcare-associated infections that was presented to the HSE board last month.

According to Mr Reid, antimicrobial resistance (AMR), where “antibiotics we have depended on for decades no longer work as well as they did or no longer work at all”, means poorer outcomes for patients and higher costs for healthcare systems and society.

“The scale of risk and the cost of managing it grows with every month that it is not adequately addressed. A major outbreak of an antimicrobial-resistant bug in one HSE hospital was estimated to have cost €2.4 million in a single year. AMR ultimately becomes an irreversible problem.”

One in 20 patients in most Irish hospitals has contracted a healthcare-associated infection while being treated in the system, he says. Half of these cases could be prevented by the consistent application of good infection prevention and control measures.

“In the past 40 years, the healthcare system in Ireland has greatly improved its infection prevention and control capacity. But it has not improved fast enough to keep pace with a more vulnerable patient population and new emerging infection risks such as AMR.”

Superbugs such as MRSA, ESBL and VRE are now “embedded” in our healthcare system, he says, though “many of these resistant bacteria were very rare in Ireland as recently as 20 years ago”.

Mr Reid says CPE (carbapenemase producing enterobacteriaceae) is the most serious superbug problem Ireland has yet faced. The number of people carrying or infected with CPE has risen from 41 in 2013 to 538 last year.

“We estimate that there are probably over 1,000 people in Ireland currently carrying CPE. We believe that a significant number of people carrying CPE have not been identified at present.”

In Greece and Italy, he points out, CPE is “already effectively beyond control”.

The current systems of the HSE, which he describes as “somewhere in between the best and the weakest” internationally, have slowed the spread of CPE and “bought time”.

Arguing for long-term investment to tackle the problem, along with cultural change within the HSE and sustained leadership, Mr Reid says a “vigorous response now has a strong chance of restoring control of CPE”.

In the first, he cited a man in need of a bone marrow transplant to survive his cancer. While preparing for the transplant in hospital the healthcare system allows bacteria that are resistant to many or most available antibiotics to move into his gut (colonisation). If those bacteria progress into his bloodstream when he is at the most vulnerable point during the transplant, his chances of a good outcome are much reduced. The cost of his treatment will also be higher.

In the second, he cited a young woman being admitted to hospital because of a minor vaginal bleed during pregnancy. An intravenous catheter is immediately placed in a vein in her arm in case she has a major bleed and needs a blood transfusion. Everything settles down. No one remembers to take the catheter out of her arm. Three days after her admission she is in the intensive care unit with an S.aureus bloodstream infection. The bacteria got into her bloodstream through the intravenous catheter she no longer needed.