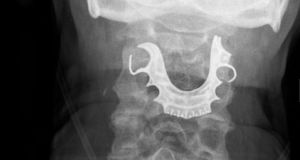 The man turned up in A&E coughing up blood and having difficulty swallowing. Photograph: BMJ

A man who turned up in A&E coughing up blood and having difficulty swallowing has surprised doctors who discovered he had false teeth lodged in his larynx.

Doctors deduced that the 72-year-old must have breathed them in during an operation several days earlier in which he was put under general anaesthetic to have a benign lump removed from the wall of his abdomen.

The case has prompted a warning to doctors to take note of whether patients have false teeth, and to keep track of where they are during operations.

“Presence of any dental prosthetics should be clearly documented before and after any procedure, and all members of the theatre team should be aware of the perioperative plan for them,” wrote Harriet Cunniffe, the author of a report from James Paget University hospital in Great Yarmouth.

The false teeth took several days to discover. Initially doctors had examined the back of the man’s throat, and finding nothing apparently amiss, carried out a chest X-ray and blood tests. Deciding the man had an infection in his lower airways, doctors prescribed him antibiotics, mouthwash and a course of steroids, before sending him on his way.

The man returned, however, two days later and told medics, apparently with a hoarse voice, that he had been unable to take his medication because he was having difficulty swallowing. He was still coughing up blood and now required oxygen.

After taking further X-rays the team suspected the man had pneumonia triggered by inhaling something. He was sent on to the ear, nose and throat team for further investigations.

Finding no problems with the back of this throat or lymph nodes, doctors inserted a thin flexible tube through the man’s nose to investigate further. To their surprise they found a metallic plate covering his vocal cords.

“On explaining this to the patient, he revealed his dentures had been lost during his general surgery admission eight days earlier and consisted of a metallic roof plate and three front teeth,” the report states.

Doctors have also been advised to listen carefully to patients. The man did indeed seem to have pneumonia, but Ms Cunniffe said doctors had failed to pay attention to the man’s swallowing problems, and that the blood tests and X-rays appeared to have acted as a distraction.

Writing in the journal BMJ Case Reports, Ms Cunniffe explained that the false teeth were removed with a pair of forceps.

This did not immediately resolve the man’s symptoms, however, because he continued to require treatment for pneumonia. The man returned to hospital four times after he was discharged because he was still coughing up blood. He lost so much that he ended up having two operations and blood transfusions.

The case of the inhaled false teeth is not the first of its kind, but is rare. A 2016 review covering 15 years found 91 separate incidents of false teeth being swallowed or inhaled in 28 countries.

The Royal College of Anaesthetists said there were no specific guidelines on the removal of false teeth before a procedure, but lists “may I leave my false teeth in?” on a frequently asked questions page on its website. The college’s patient information on undergoing anaesthesia also notes there can be pros and cons to removing them.