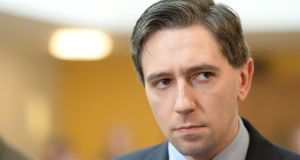 A spokeswoman for Simon Harris said: ‘Tony O’Brien took the decision to step down from his post. The Minister believes that was the right decision.’

Taoiseach Leo Varadkar has strongly backed Minister for Health Simon Harris in his running of the health service, after the Minister was severely criticised by former head of the HSE Tony O’Brien.

Mr Varadkar said that this year Mr Harris had “led the charge for the Government on the Eighth Amendment and got the Public Health Alcohol Bill enacted at long last.

“Health is a really tough ministry. He’s handling it with ability, empathy and maturity.”

Mr Varadkar was speaking after a hard-hitting and highly critical interview in the Sunday Business Post in which the former HSE chief described Mr Harris as behaving “like a frightened little boy” during the cervical cancer screening controversy .

Mr O’Brien said in the interview that Mr Harris was a “weak” Minister who was obsessed with media coverage and who “runs scared of headlines”.

In response, Mr Harris indicated that it was right for Mr O’Brien to step down as head of the HSE at the height of the controversy.

The Minister, through his spokeswoman, signalled on Sunday that it was Mr O’Brien who made the decision to leave his role as HSE director general last May.

In a statement on Sunday, the spokeswoman said: “The Minister doesn’t believe in engaging in the politics of personalised attacks. The CervicalCheck situation was a very difficult time for women in Ireland.

“They felt let down. The women were, and are, the Minister’s priority. Tony O’Brien took the decision to step down from his post. The Minister believes that was the right decision. He wishes him well.”

Meanwhile, Minister for Justice Charlie Flanagan said Mr O’Brien’s comments about Mr Harris were “totally out of order” and he “did himself no favours” by using personalised language.

Mr Flanagan said Mr O’Brien had a “pretty rapid fall from grace himself” and he described Mr Harris as a dynamic and committed Minister. “I don’t think there’s any more diligent colleague around the Cabinet table,” he said.

Mr O’Brien stood down as HSE director general on May 10th, several weeks before his contract was scheduled to expire, in the midst of the controversy over cervical cancer screening.

In his interview, he also said he believed the Dáil Public Accounts Committee (PAC) – which held a number of hearings on the cervical cancer controversy – had conducted itself like a “kangaroo court” and he accused Sinn Féin of being particularly destructive.

He said the HSE’s initial response to the controversy had been a “trainwreck” but also said he had been horrified by the non-disclosure of audit results to women and families affected.

The Irish Hospital Consultants Association welcomed comments by Mr O’Brien in his interview that the biggest issue affecting public hospitals is the recruitment and retention of consultants.

Separately, the Sunday Independent maintained that there had been a breakdown in trust between Mr Harris and some of his senior officials over his handling of the cervical screening controversy and his alleged failure to support civil servants.

A spokeswoman for Mr Harris said: “The Minister’s priority from day one has been threefold. Number one was making sure those impacted were supported. Number two was ensuring the facts were established and recommendations were put in place to make sure lessons were learnt and number three is working to effectively eradicate cervical cancer from our country through the best possible screening and vaccination programme.

“The Minister is working very closely with officials in his department to make this a reality. He commissioned Dr Gabriel Scally to externally investigate matters [to do with the CervicalCheck controversy] and an implementation plan for his 50 recommendations will go to Government shortly. The Minister has also asked Dr Scally to externally oversee the implementation plan and to do some further work.

“The Minister is also engaging closely with patient representatives including Vicky Phelan, Stephen Teap and Lorraine Walsh, and is extremely grateful to them for their incredible advocacy.

“He is determined that some good will come from this very difficult situation.”