Fire crews will be ‘non-stop, flat out’ on Halloween night, says service 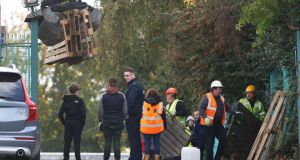 Fire stations across Dublin will be on standby from around 4pm on Wednesday to respond to reports of bonfires coming in to the Dublin Fire Brigade call centre.

The full fleet of 21 fire engines and 137 firefighters will be in operation throughout Halloween night.

Fire stations in the capital have already seen a spike in reports of bonfires on grass areas of housing estates. On Saturday, the fire service received 170 calls related to fires; 60 were for bonfires. Last week, the service logged 630 callouts, nearly double what might be expected in a given week.

Darren O’Connor, a sub station officer in Dublin Fire Brigade headquarters, said last Halloween firefighters were called to more than 220 bonfires. Crews will be working “non-stop, flat out” through the evening, he told The Irish Times.

“We’ve been quite successful, we haven’t had any major incidents of damage to property or life in recent years,” he said.

The fire service has already been responding to stockpiles of wooden pallets and vehicle tyres catching fire.

In recent weeks a derelict building was burnt out by a stash of wooden pallets collected for a bonfire, which had caught fire, Mr O’Connor said.

There is a safety risk for firefighters on Halloween night, with an anti-social element consuming alcohol around the bonfires, he said.

“Last Sunday, a crew responded to a callout in Dolphin’s Barn, related to a bonfire on a grass area. Some youths threw rocks through the fire-engine’s front window, shattering the glass on to the drivers, who managed to get out and were not injured,” Mr O’Connor said.

Other common threats include fireworks thrown at crews, he said. On Wednesday night fire crews will not engage in cases where crowds are around a bonfire, without the assistance of An Garda Síochána, he said.

In many cases people will be “naive” about the risks of attending bonfires, with fireworks or household aerosol cans thrown into the fire posing a safety threat. One less common but “massive risk” is where propane gas cylinders are thrown into the fires, he said.

The fire brigade has come across cases where gas cylinders have “fully exploded” in bonfires, Mr O’Connor said. Smoke from the fire can also contain harmful fumes from paint and tyres, he said.

Dublin City Council and the gardaí have been confiscating stockpiled bonfire material in 4am raids over the last number of weeks. A spokeswoman for the local authority said “significant amounts” of material had been recovered.

AA Ireland issued a warning to motorists to reduce their speed on Wednesday evening, particularly when driving in residential areas. Conor Faughnan, director of consumer affairs at AA, said there was an increased risk of children trick-or-treating stepping out on to roads, or pets startled by fireworks darting in front of vehicles.

“Motorists can do their part by slowing down and remaining vigilant, particularly when driving in and out of estates,” Mr Faughnan said.

Ahead of Halloween night, An Garda Síochána appealed for parents to ensure their children and teenagers did not have illegal fireworks in their possession.

“Each year many children and young people suffer terrible injuries caused by fireworks, including burns, loss of limbs and serious eye injuries,” a Garda spokeswoman said.