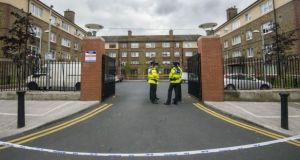 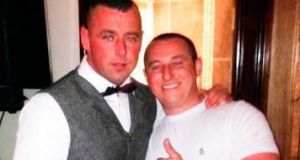 Jonathan Keogh (left) and Thomas Fox who have been found guilty of the murder of Gareth Hutch in 2016. Photograph: Padraig O’Reilly

A brother and sister and another man have been jailed for life by the Special Criminal Court after being found guilty of the “deliberate and callous murder” of Gareth Hutch over two years ago.

The three-judge court found Jonathan Keogh (33) fired the fatal shots that killed Mr Hutch (36) in “cold-blooded manner” and “had a hand in almost every aspect” of the planning of the murder.

The non-jury court also found that Thomas Fox (31) made a “probable” contribution to Mr Hutch’s murder, was a subordinate of Jonathan Keogh and acted under his general influence and direction.

Mother-of-five Regina Keogh (41) “colluded” with her brother to cause serious injury to Mr Hutch and was guilty of murder due to her involvement with her brother’s affairs, the court also found.

Mr Hutch, nephew of Gerry ‘the Monk’ Hutch, was shot dead as he was getting into his car outside Avondale House flats on North Cumberland Street in Dublin on the morning of May 24th, 2016 in what the court said was not a “spontaneous killing or reactive killing”.

He died as a result of four gun shot injuries; two to the back of the neck, one to the lower back and one to the right of the upper chest.

Fox was also convicted of unlawfully possessing a Makarov 9 mm handgun on May 23rd, 2016 at the same place. He was sentenced to six years in prison to be served concurrently alongside his mandatory life sentence.

There was a heavy presence from the Garda Public Order Unit in the court for the delivery of the verdicts.

Following their guilty verdicts, the three defendants returned to court fifteen minutes later to be sentenced to the mandatory term of life imprisonment, backdated to when they each first went into custody.

It was the State’s case that a heated exchange took place between Jonathan Keogh and Hutch on the day prior to the shooting, that Keogh was heard expressing his intention to kill Hutch later that evening and that he was one of the two gunmen responsible for the murder.

Delivering the lengthy judgement following a nine-week trial which ended in July, Mr Justice Hunt said the court accepted the prosecution’s case that a considerable amount of planning and coordination had gone into this killing. “All those that are involved in planning are guilty of the crime of murder”.

The prosecution contended that key prosecution witness Mary McDonnell (45) was encouraged by Regina Keogh, her “best friend” and neighbour of 16 years, to allow Jonathan Keogh use her flat “as a base” to wait for Mr Hutch prior to the attack as her kitchen window had a view into his flat.

Mary McDonnell testified that Regina Keogh had said to her: “That’s the only way it is going to happen, if not Jonathan is going to be shot.”

The prosecution contended that Thomas Fox was “instrumental” in planning the murder as well as being the getaway driver for the shooters.

Mr Justice Hunt, said that Fox maintained his involvement was brought about by coercion and had been “counteracted” by a later withdrawal but the prosecution had established that the defence of withdrawal was not available to Fox.

A victim impact statement from Vera Hutch, mother of Gareth Hutch, was read to the court on Friday afternoon by Garda Eoin Treacy.

Mrs Hutch said her world had been changed forever since the death of her son. For over 35 years she had the privilege and honour of being Gareth’s mother before he was “senselessly and cruelly taken from” them, she said.

“It has been almost two and a half years since Gareth was taken from us and it still haunts me every day. It hurts emotionally and mentally just to get out of the bed in the morning. I can’t sleep most nights without nightmares of the horrific morning on May 24th 2016,” she said.

She said the pain her family has suffered is “unbearable” and they will never get over it. “We struggle everyday as a family and can’t comprehend why this happened. There are many times I have even wished that I had died that morning with Gareth,” the court heard.

Mrs Hutch said she had to remind herself that her family and grandchildren need her but they no longer feel safe and his death has destroyed their family.

“We will never get to see Gareth again, never get to see him smile or laugh which was contagious once you heard him. You have taken away my will to live, you have broken my spirit,” she said.

“Not only did you take away my son, you have taken away a brother, uncle, friend, and most of all a daddy. I feel an enormous amount of sadness that his son loses out on having a daddy at the most critical time in his life. Gareth was denied the opportunity of watching his son grow up, he will never get to bring him to his first football game,” the court heard.

Mrs Hutch said that as they waited for the legal process to unfold, the rollercoaster of emotions continued and she feels frustration and anger that her son is dead and will never be home again.

“Now I ask the court to consider the magnitude and impact of this crime on my family and his son. I realise you have the final say, but considering the violent and callous nature of this crime and the little value of life, a maximum sentence should be served, as any time incarcerated is nothing compared to what my family will experience for a lifetime,” she concluded.

Jonathan Keogh interrupted Gda Treacy as he was reading the victim impact statement, shouting: “What about everyone else’s families, what about all the other families, sorry judge. F***ing bastards, rats.”