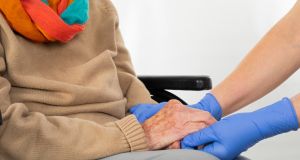 Nursing homes were forced to use painters’ overalls and supplies of personal protective equipment (PPE) from local schools and vets, and faced weeks of delays to get coronavirus tests for residents and staff, newly-released papers show.

Hundreds of pages of exchanges between the Department of Health and nursing homes’ organisations highlight repeated attempts by the latter to get clarity on testing, hospital discharges and PPE from the start of the pandemic.

In late March, 88 per cent of nursing homes polled for a survey given to the Minister for Health Simon Harris said that they had bought their own PPE, or had been forced to use home-made versions.

One nursing home had spent €12,000 on “painters’ overalls, painters’ goggles, surgical masks that cost €1.50 each” and bought overalls from local vets, and face masks purchased from a local dressmaker.

Repeatedly during February, March and April, the chief executive of Nursing Homes Ireland, Tadhg Daly, told the HSE, Department of Health and Mr Harris that the situation could get “out of control”.

Nursing Homes Ireland first flagged the need for “urgent” dedicated guidance for nursing homes as early as February 28th, the correspondence released ahead of a meeting of the Dáil’s Covid-19 committee shows.

Noting the statements then being made by the HSE that there was an adequate stock of PPE, Mr Daly said: “This is not the case for our member homes.”

The group said it was receiving “constant queries” during March and in a letter sent to health officials on March 13th, Mr Daly said there were “no assurances” coming from health services.

Concerns about staff shortages were repeatedly raised. In early March, Mr Daly warned that homes were not getting adequate guidance on how to stop the spread of transmission, or deal with patients showing symptoms.

In an effort to highlight grievances, Nursing Homes Ireland conducted a survey of its members in April, the findings of which were forwarded to Mr Harris, ahead of a meeting in March.

Some 44 per cent of homes who replied said they had waited more than 10 days for testing. One said they were “still waiting 20 days later”, while a resident in one home died while waiting for test results.

In some places, staff angry about “empty promises” about protective gear threatened to quit. Some were leaving to qualify for the Government’s Covid-19 weekly pandemic payment.

Some 12 per cent of nursing homes said they were “waiting indefinitely” for PPE supplies. One reported a month-long delay. Another said they were told that they would not get PPE until they had a confirmed case.

The release of the correspondence by the department just 90 minutes prior to Mr Daly’s appearance before the Oireachtas Special Covid-19 Committee on Tuesday was sharply criticised by members of the committee.

Throughout March, Nursing Homes Ireland began to warn of “cataclysmic consequences” and said it was “frankly appalled” to be excluded from a working group.

The nursing homes’ representative group also accused the National Treatment Purchase Fund, which was administering financial supports, of “prevarication” and “foot-dragging” which was “breathtaking in the extreme”.

Tensions between the Health Information and Quality Authority (Hiqa) and the Nursing Homes Ireland grew after an Irish Times article earlier this month, where a Hiqa deputy chief inspector raised the possibility of the installation of Perspex glass and “prison-type visiting scenarios” in future.

In a letter to Hiqa, Nursing Homes Ireland said that the comments were “deeply offensive, upsetting and irresponsible”.

Seven firearms seized by gardaí investigating organised crime 13:57
Pub substantial meal rules a ‘farce’ like being on set of Darby O’Gill and the Little People 13:47
Limerick people ‘grossly insulted ’ by Micheál Martin appointments, says Willie O’Dea 13:26
Michelle O’Neill will not step aside ‘under any circumstances’ despite calls from other parties after Storey funeral 13:24
State to pay costs of failed action over Seanad composition 13:16

1 World, look away now – these are dark days for the United States
2 Michelle O’Neill will not step aside ‘under any circumstances’ despite calls from other parties after Storey funeral
3 Health officials ‘very concerned’ about foreign travel, says Donnelly
4 ‘Grossly irresponsible’- Waterford mayor condemns house party of 60 people
5 Bobby Storey: The IRA's planner and enforcer who stayed in the shadows
Real news has value SUBSCRIBE