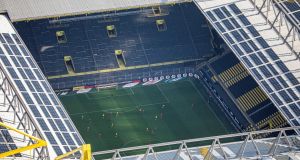 In this aerial image, Borussia Dortmund and Bayern Munich play in fron of empty stands in their Bundesliga match in Dortmund last week. The German league was the world’s first major soccer competition to resume after a two-month suspension because of the coronavirus pandemic. Photograph: Federico Gambarini/DPA via AP, Pool

Frustrated fans may have to wait awhile yet before they get the chance to return to large-arena sport where nothing quite beats the live experience.

In South Korea, professional soccer teams have tried to recreate atmosphere by piping music into empty stadiums. FC Seoul went too far, however, in filling some of its stadium seats to mimic a crowd with dummies which observant fans identified as sex dolls. The club later apologised but was hit with a record fine by an unamused league.

In Japan they are turning to technology: an app allows fans following on TV, radio or online collectively to encourage – or berate – players, and, no doubt, insult referees via their smartphones. Their cheers, chants and boos reverberate around the stadium through loudspeakers.

The TV experience can also be enhanced, German clubs are finding, by playing canned crowd noise through matches above the commentary. In the US last week, viewers had the option of watching Borussia Dortmund against Bayern Munich on two different channels and, reviewers insist, the one with the noise was considerably better. But it’s not only the fan experience that is suffering in the pandemic. The performance of players is being hobbled. Sports psychologists have long documented “social facilitation” and the important positive effect of supportive crowds on players. Home advantage, in other words.

Among others, Donald Greer of the University of Illinois carried out a study which related performance variation to sustained bouts of booing at basketball matches. He found close subsequent correllation to such measures as scoring, turnovers and fouls, and concluded crowd noise significantly inhibited the performance of visiting teams. A study of European tour golfers by Lincoln University found that top players need to, and can, develop the ability to “zone out” of crowd heckling to perform at their peak for longer – to stand taller, walk rythmically and react better to bad shots. Empty stadiums are not just about fans missing out, or the absent cash of turnstile revenues. They’re changing the nature of sport itself.

1 Dublin has crowd-free weekend as pubs long for July 20th restart
2 Taoiseach urges British people not to holiday in Ireland at present
3 Keith Duggan: Bubba Wallace tweet shows just how troubled Donald Trump’s mind is
4 Anne Enright: ‘Nuala O’Faolain was an impossible person, to whom we owe so much’
5 50 best Irish albums of all time – in order
Real news has value SUBSCRIBE