Coronavirus in Ireland: ‘There is no immunity out there’, health officials warn 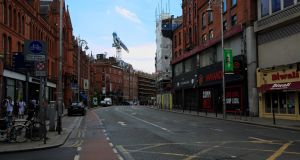 The level of exposure of the Irish population to Coronavirus could be as low as one per cent, with public health officials warning on Thursday that “there is no immunity out there”.

Professor Philip Nolan, who is in charge of modelling the spread of the virus in Ireland, said on Thursday evening that his “best guess” is that around one per cent of the population had been exposed, although the figure could be as high as five per cent.

“If the virus begins to transmit again in the population, it will transmit freely,” he said. Prof Nolan, who chairs the epidemiological modelling advisory group of the National Public Health Advisory Team (NPHET), said his view is informed by studies done on testing in populations.

“For every hundred people out there, there’s at least 95 who have never been exposed to this virus,” he said. “If we start to transmit it because of the way we act, there is no protection against the virus.”

He was speaking as the NPHET published new figures showing another 12 people with Covid-19 had died in the State, bringing the total to 1,583. Another 76 cases were confirmed, with a total of 24,391 people now diagnosed with the disease.

Prof Nolan said efforts to suppress the disease had largely been successful, with the Reproduction number estimated to be between 0.45 and 0.63. This is an estimate of how many people an infected person will pass the virus onto.

“Indicators of the disease are very good, with all major indicators either declining or stable,” Prof Nolan said. However, he warned that an increase in the R number would see a rapid escalation of cases. He said the average number of new cases per day had fallen from 559 on April 16th to 72 on Thursday, while the numbers in hospital, averaged over the previous five days, had fallen from 865 to 380.

Asked about comments by the Taoiseach, Leo Varadkar, that some measures could be fast tracked if the data supported such a decision, Deputy Chief Medical Officer Dr Ronan Glynn said such a move was possible but added: “I’m not seeing anything in particular that would lead me to believe that we would markedly change from the general direction of that roadmap.”

He said if people stop adhering to public health advice, “there is always a risk that things could go in the opposite direction . . . it is very important people do not become complacent.The R number is very finely balanced at any point in time. It would not take much at all to go from 0.5 to 1.5 and have us right back where we were two weeks ago.””

Dr Glynn said NPHET would on Friday discuss measures to help children and parents, but would not be drawn on the detail of the schemes.

Meanwhile ome Northern Ireland pupils could return to school in late August with a phased return for other students starting in September, the North’s education Minister Peter Weir said on Thursday. The North’s Department of Health reported on Thursday that seven more people have died from Covid-19 bringing the total number of fatalities in the North to 501, The department also reported 42 news cases of coronavirus .