Sepsis death rate rises again after falling for a decade

Almost one in five people with sepsis last year died, with mortality rate up 10.1% on 2017 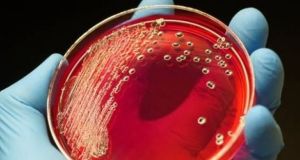 Sepsis is triggered by infection, leading to organ malfunction and failure. Photograph: Getty

One in five patients who develop sepsis dies from the condition, and mortality rates are on the rise again after falling for almost a decade, a new report shows.

Earlier this year the HSE won an international award for its efforts to tackle sepsis after showing it had cut the death rate from the condition by 5 percentage points.

The report suggests the trends of falling incidence and rising mortality rates may be driven by a change in definition of the condition that has led to fewer people, with more serious cases, being coded as having sepsis.

The condition places a major burden on the health system, with the average patients with sepsis spending 21.9 days in hospital.

There has been an increased focus on the condition since Savita Halappanavar’s death in 2012, which did much to increase public awareness and the need for great vigilance in the health service.

Sepsis is triggered by infection, leading to organ malfunction and failure. It is the 10th-biggest cause of death in the world, yet no single test can confirm its presence. Even in cases where doctors intervene quickly, patients can die.

“The next most effective way is early recognition and treatment. This is not simple. Sepsis evolves over time and the pattern of evolution is extremely variable as it depends on the patient’s general health status, their genetic response to infection and the characteristics of the infecting microbe.”

The report is usually published at a national sepsis summit held in Dublin each autumn, but publication of the 2018 report was delayed.