Risk of dying from breast cancer has halved since 1994, according to National Cancer Registry report 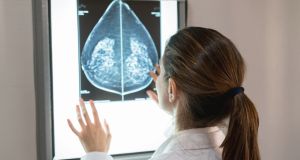 The Government has promised the BreastCheck screening programme will be extended to those aged 65-69 by the end of 2021. Photograph: iStock

Breast cancer survival rates have increased by 15 per cent since the 1990s, according to a new report that demonstrates the positive impact health screening programmes have made.

Over this period, the risk of dying from breast cancer halved as more and more cases are identified at an earlier stage.

Ten-year survival rates are also rising, though the most recent figure of 76 per cent dates from 2010.

The percentage of cases identified at stage 1, the least invasive stage, rose from 21 per cent to 33 per cent over the period, according to the report.

Welcoming these findings, Minister for Health Simon Harris promised the BreastCheck screening programme will be extended to those aged 65-69 by the end of 2021.

The vast majority (97 per cent) of female patients who were diagnosed had treatment to remove tumours or prevent their growth. While the proportion getting surgery remained high, at 85 per cent, there was an increase in the number of women having breast-conserving surgery, from 42 per cent to 54 per cent.

Conversely, fewer women required mastectomies – at 31 per cent, down from 43 per cent in the 1990s.

The average age at diagnosis was 59 years, with 40 per cent of cases occurring in the current breast screening age cohort of 50-64 years.

Mr Harris said it was “heartening to see the increase in early diagnoses leading to better outcomes. Increasing awareness of breast cancer, and strong uptake of BreastCheck, which will further improve survival rates”.

“This is a result of targeted investment by successive Governments. Next year, we will continue to invest in the National Cancer Strategy and will increase eligibility for BreastCheck by the end of next year.

“I strongly encourage all eligible women to participate in this free service. It saves lives and today’s report confirms that.”