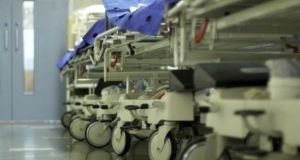 The number of nurses in Ireland has not kept up with population growth since 2008, the report notes.

Ireland produces more medical graduates than any other country relative to its population, but relies more heavily on foreign-trained doctors than almost anywhere else, a new report shows.

Ireland produces 24.9 medical graduates per 100,000 population, well above the next country, Denmark, and almost twice the international average of 13.1, according to the 2018 Health at a Glance report from the OECD.

However, Ireland’s share of foreign-trained doctors is the third highest among western countries, at 42.3 per cent. Only Israel (57.1 per cent) and New Zealand (42.4 per cent) are more dependent on overseas doctors.

The report says Ireland’s high number of medical graduates results from its large share of international medical students. Last year, these accounted for half of all medical students, with the majority coming from outside the OECD.

“However, after obtaining their first medical degree, international medical students often leave Ireland due to difficulties in securing an internship – the last stage in medical education prior to postgraduate training. At the same time, Ireland compensates for its shortage of doctors by importing doctors trained in other countries.”

Although the Irish health system also relies heavily on overseas-trained nurses, the survey contained no Irish figures for the share of such nurses.

The report says Ireland spends $4,915 per head on health, above the average of $3,994; this includes both the outlay by the State and individuals’ out-of-pocket expenses.

Measured as a share of GDP, Irish health spending, at 7 per cent, is below average. However, high foreign direct investment in Ireland makes GDP-related assessments of health spending unreliable.

According to the report, Irish GPs earn 2.8 times the average industrial wage, compared to a multiple of 4.4 in Germany, 3.1 in the UK and 2.9 in France. Irish consultants earn 3.5 times the industrial wage, similar to those in Australia or New Zealand.

Irish nurses earn 1.1 times the average wage, same as the international average. Their earnings, reported at $64,200, adjusted for local purchasing power, rank sixth in the OECD.

The number of nurses in Ireland has not kept up with population growth since 2008, the report notes.

The average life expectancy of an Irish person is 82.2 years, well above the OECD average of 80.7 years.

Irish smoking rates are close to international averages (17 per cent against 18 per cent across the OECD), as are alcohol consumption (11.2 litres per head, compared to 8.9 per cent).

Some 62 per cent of people in Ireland are overweight or obese, higher than in most countries but lower than the figures for the UK and the US. Deaths from air pollution in Ireland are half the OECD average.

The OECD faults Ireland for the high rates of antibiotic use and avoidable admissions for asthma and chronic lung disease, but spending and staffing levels in health are considered to be close to average.

Ireland has some of the lowest levels of hip replacement surgery, according to the report, though the Irish figures are depressed because no account is taken of work done in the private sector.

The report shows Ireland’s population is still significantly younger relative to other western countries, and will remain so for many decades.

Some 13.6 per cent of the Irish population are over 65, with 3.2 per cent aged over 80, both well below the OECD average. Projections show Irish figures rising in the years to 2050, but remaining below the international average.

The report refers to the fact Irish health spending is 25 per cent above average while breast cancer survival figures are slightly below average. The incidence of cancer overall in Ireland is third highest, behind Australia and New Zealand, while mortality from the disease is slightly above average.

The OECD warns health spending internationally will continue to outpace GDP growth in most countries over the next 15 years. Money could be saved by more spending on generic drugs and by making improvements in patient safety, it suggests.