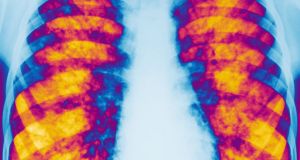 ‘It truly is a remarkable time of hope and progress in CF care in Ireland and worldwide.’ Photograph: Science Photo Library

A groundbreaking new therapy to treat the vast majority of people with cystic fibrosis could be available in Ireland as early as next summer, according to CF Ireland.

The drug, Trikafta, significantly improves lung function in most patients with the disease, according to newly published clinical studies. As a result, CF could change from a disease that can be life-threatening to a manageable condition for patients who can be treated with this therapy.

Last week the US Food and Drug Administration approved Trikafta for 90 per cent of CF patients who have the most common gene mutation and are 12 or older. The manufacturer, Vertex Pharmaceuticals, has now submitted a marketing authorisation application to the European Medicines Agency (EMA).

“These findings indicate that it may soon be possible to offer safe and effective molecularly targeted therapies to 90 percent of persons with cystic fibrosis,” said the director of the US National Institutes of Health, Dr Francis Collins, who led the team that identified the gene that causes the disease in 1989.

“This should be a cause for major celebration,” he wrote in an editorial in the New England Journal of Medicine.

Dr Collins described the improvement in lung function of patients treated with the triple-combination therapy in the Vertex-funded trial as “striking”.

According to chief executive of CF Ireland Philip Watt, under the 2017 deal struck between the Government and Vertex for access to existing drugs and those in development, Irish patients currently accessing a Vertex drug “should” be automatically entitled to Trikafta once it is approved by the EMA.

“When you see the growing excitement about this new therapy from both patients and scientists in the US and worldwide, the fact it can potentially impact on 90 per cent of CF patients; and the fact it has been fast-tracked in the US by the FDA five months ahead of schedule, it truly is a remarkable time of hope and progress in CF care in Ireland and worldwide,” Mr Watt said.

“The next stage is approval by the EMA, and all being well, Trikafta could become available in Ireland by mid-2020.”

Under the 2017 deal, which cost €400 million over five years, new treatments and extensions of existing treatments to new patients are made available to Irish CF patients.

CF is an inherited disease primarily affecting the lungs and digestive system of about 1,300 children and adults in Ireland. Ireland has one of the highest rates of CF in the world, about four times the European average.

It causes the body to produce a thick, sticky mucus that clogs the lungs and obstructs the pancreas. It also stops natural enzymes from helping the body break down and absorb food. There is no cure.