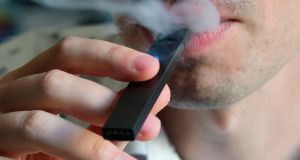 The Royal College of Physicians of Ireland said the study’s findings on vaping were ‘worrying’. File photograph: Eva Hambach/AFP/Getty Images

E-cigarettes damage the brain, heart, blood vessels and lungs, according to a new study by cardiologists who have called for a ban on vaping.

The study, published in the European Heart Journal, casts fresh light on the mechanisms by which e-cigarettes can cause damage to the body through toxic chemicals produced in the vaping process, and which may also be present at lower concentrations in the vaping liquid.

Based on tests performed on healthy smokers and mice, the study is the latest piece of research to point to the harmful effects of vaping.

Earlier this week, separate research found the fluid in e-cigarettes may cause potentially life-threatening inflammation in those who are susceptible.

In the latest research, German scientists investigated the effect of e-cigarette vapour on blood flow in the main blood artery in the upper arm of 20 healthy smokers before they vaped an e-cigarette and then 15 minutes afterwards. They also measured how stiff the artery became. In addition, they exposed 151 mice to e-cigarette vapour over one, three or five days for 20 minutes six times a day.

They found just one vaping episode increased heart rates and caused the arteries to stiffen and the inner lining of the arteries, the endothelium, to stop working properly in the smokers. The endothelium protects tissues from toxic substances and regulates inflammation and blood-clotting processes. Endothelial dysfunction is involved in the development of cardiovascular disease.

Smoking vs vaping - what the test results show VIEW NOW

Results from the mice showed an enzyme called NOX-2 was responsible for damage to blood vessels in the lungs and the brain as a result of e-cigarette vapour.

“We also found a toxic chemical called acrolein, which is produced when the liquid in e-cigarettes is vaporised, activated the damaging effects of NOX-2,” said Prof Thomas Münzel, of the University Medical Centre Mainz, who led the study.

Prof Münzel said e-cigarettes were so dangerous, and addictive, that countries should consider banning them. “We cannot allow an entire generation to become addicted to nicotine,” he said.

Dr Paddy Barrett, a cardiologist at the Blackrock Clinic in Dublin, said vaping was likely to be “the lesser of two evils” compared to smoking but warned of “disproportionately large” impacts where people start vaping at a young age.

“It has taken decades of work to substantially reduce smoking rates in Ireland and for us to begin to realise the public health benefits. Much of this work will be eroded if we simply substitute one potentially less toxic exposure to a much broader population at a younger and younger age.”

While long-term data on the effects of vaping were needed, to wait for this “would be to wait too long”, he warned.

The Royal College of Physicians of Ireland (RCPI) described the findings as “worrying”. “It certainly strengthens the concerns of doctors around the potentially serious health impacts of e-cigarettes, and also demonstrates the importance of performing independent research in this area without the funding of e-cigarette companies,” said Dr Des Cox, chair of the RCPI’s tobacco policy group.

Vape Business Ireland noted the small sample size used in the research, and pointed to a recent statement from Public Health England, which says e-cigarettes are “far less harmful than smoking”.

The Government plans to introduce legislation soon to ban the sale of vaping products to under-18s, and to introduce a licensing system for such products.

1 Covid-19: One more death and 174 further cases confirmed in State
2 German nudist chases wild boar that stole laptop at Berlin lake
3 ‘It is soul destroying’: Kildare hotelier on calling guests to cancel
4 Midlands lockdown Q&A: Firstly, is it a lockdown or not?
5 Garda checkpoints in Kildare, Laois and Offaly as restrictions come into force
Real news has value SUBSCRIBE