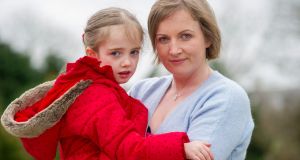 An eight-year-old girl who was prescribed medicinal cannabis for a rare form of epilepsy is in danger of losing medication her parents describe as “life saving”, because they cannot sustain its €20,000 a year cost.

Ava Twomey, from Aghabullogue, Co Cork, travelled to the Netherlands last summer with her family to receive medicinal cannabis to treat Dravet syndrome. After two years of campaigning, her parents, Vera Twomey and Paul Barry, received the news last December of the granting of the medicinal cannabis licence for Ava.

Ava, who suffered multiple seizures a day, is now seizure free. However, Ms Twomey said the Government has thus far refused to allocate funds for Ava’s cannabis medication even though the multiple tablets that her daughter previously took, which failed to alleviate her seizures, were paid for under the long-term illness scheme.

Ms Twomey said the “light would go out” in her daughter’s world in the event of her ceasing the medicinal cannabis.

“We were granted a licence for medicinal cannabis last December and we returned home after a six-month exile over in Holland. Our thoughts were that Ava’s medication would be covered like all her epilepsy medication had been covered. It was automatic that when the consultant would prescribe a new medication that it was placed under the scheme. However, when we returned from the Netherlands we contacted the HSE/Department of Health to discuss how it would be paid for. We thought normal life would resume again. At present they have told us they have difficulty with covering the medication from Holland.”

Travel at own cost

Ms Twomey said they travelled to the Netherlands for the medication at their own cost and were simply looking to be reimbursed for the medicinal cannabis.

“We are importing the product into Ireland for them. We simply need Ava’s medication to be reimbursed. They said they would need policy changes to be made. I would ask Simon Harris to meet his responsibility to Ava.”

A Department of Health spokesperson said it was considering the issue of access and funding proposals for cannabis-based products for medicinal use. The legal issues involved in developing a reimbursement process are being examined and officials are working to resolve the situation.

The department said licences had been issued in Ireland for THC-based products for medical use by patients and that those products had been dispensed by chemists on foot of a valid prescription written by an Irish-registered medical practitioner.

However, the department stressed that rules put in place by individual jurisdictions around export of goods were a matter for each jurisdiction and different rules were applied by different countries. “Local restrictions in place in the Netherlands do not permit commercial export of cannabis-based oil products from that country. The Irish Government has no remit in the imposition of such rules in other countries,” the department said.

Ava’s mother said, “At its worst Ava was taking 16 tablets a day . . . Maybe on a day you are rushed in to hospital with Ava and when she recovers consciousness there is another two, four or six tablets to take that night. Years and years of this. In between the medication and seizures there were high temperatures, pain and suffering. There is an unbelievable trauma to a child. They are now gone.”

“My daughter was living a life where she was controlled by seizures. There were tremendous, horrible side effects. She would drool and it would continue all day long. My daughter said to me last week ‘I love you.’ It was a little bit blurred. But that took eight years for that to happen. My daughter is able to express what she is feeling now. She can balance, she can walk and she can run. It has changed her whole life.”

Ms Twomey said that if they were left unable to pay for the medication then her daughter’s life would come to a standstill.