Versatis patches ‘made such a difference’, says user 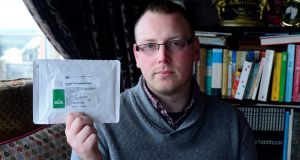 “Patch Us Back Up” spokesman Seamus Eustace (27) from Co Offaly had an accident while kayaking about four years ago and sprained his wrist.

“I didn’t do anything about it. I was just out of action for a few weeks. So I went back and didn’t think anything of it. In the March after the November, I turned around really quickly in the car and sort of felt a pull in my neck. I just thought it was a pulled muscle so I didn’t worry too much about it, but then the pain went down my whole left side and throughout my whole body.”

Mr Eustace, who is studying software engineering in Athlone, attended physiotherapists and pain specialists to no avail but was put on Versatis patches about three years ago.

“I was using gels, the likes of Difene, but I was just wasting my time because they didn’t do anything.

“The patches made such a difference. It doesn’t take away the pain fully, but it makes it bearable. You’d notice it within less than an hour of putting it on; there’s a difference in the pain levels. They say you can leave it on for 12 hours, but you don’t really get the full 12 hours; you’d get maybe eight or nine hours out of it,” he says.

Mr Eustace says some days he might not use the patches at all, but he mostly uses them at night time when he puts two on his ribcage.

“Sometimes if the pain is really bad in my back or my legs I put it on there as well. I’m on other painkillers as well.”

He has had a number of MRI scans and, while there is some arthritis in his spine, the specialists tell him it is still “not enough to be causing this much pain”.

“Some days I feel fine, but when I say ‘fine’ the pain levels are somewhat bearable. But if I go and do anything physically demanding I’d be in bits for days or weeks after it.”

He says he could not afford the €160-€170 a month it would cost him if he had to pay for the patches. He has been approved to use them but there has been confusion over how long his prescription is approved for.

Some people are being given approval for three months’ prescriptions, others for six months and others indefinitely. “But then they are reneging on the decision and changing it to six months.”

Six counties register no coronavirus case over past week 15:26
First ever woman president of an Irish university appointed at University of Limerick 14:58
Varadkar accused of naivety over ‘Covid penalty’ on mortgage holders 14:26
Learner drivers could be forced to take driving lessons to renew permits 13:20
Covid-19: Small minority of pubs putting health of customers and staff ‘at risk’ 13:05

1 Donald Trump is an amateur populist – the real trouble is yet to come
2 Mother and five children sleeping in car while seeking accommodation
3 Six counties register no coronavirus case over past week
4 Covid-19: Small minority of pubs putting health of customers and staff ‘at risk’
5 Ex-Fianna Fáil TD apologises to Mary Lou McDonald over ‘damaging’ tweet
Real news has value SUBSCRIBE