Majority of cases in mid-west but disease has also spread to Dublin, Kildare andWicklow 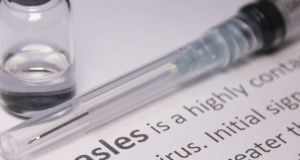 The recent outbreak of measles is spreading across the country, with 40 cases now confirmed by the Health Service Executive (HSE).

The outbreak, which began in Limerick city in January, has worsened in recent weeks, with a further 22 possible cases of measles reported to the HSE’s Health Protection Surveillance Centre (HPSC).

A measles outbreak control team has been set up by the health service, which is “continuing to investigate” further suspected cases, a spokeswoman said.

Two doses of the MMR (Measles-Mumps-Rubella) vaccine is the best way to protect against the virus. A free MMR vaccination clinic is being run in Limerick city, and the HSE is funding local GPs to provide the vaccine free of charge for the duration of the outbreak.

The World Health Organisation has a 95 per cent target for uptake of the MMR vaccination to ensure population immunity but this has not been achieved in Ireland due to resistance among some parents to vaccinating their children.

In most cases the virus results in a high fever and rash, but some complications can be fatal. The virus is highly contagious, and those who have not had two doses of the MMR vaccine, young babies, or individual’s with weak immune systems are more prone to picking up the disease.

Half of the confirmed patients who have contracted the virus in the mid-west region are adults younger than 40 years of age.

Elsewhere across Europe several other countries have reported significant measles outbreaks over the recent winter period.

The HSE have advised that anyone showing symptoms of measles should stay at home, avoid school or work, and contact their local GP. Common symptoms include high temperature, a dry cough, rash, and visible greyish or white spots in the person’s mouth or throat.