Scientists in the US have identified a new human organ hiding in plain sight, in a discovery they hope will help understand how cancer spreads within the human body. Video: Reuters 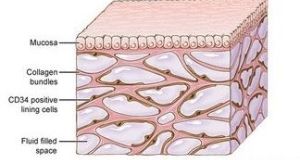 Schematic of the fluid-filled space supported by a network of collagen bundles lined on one side with cells. Illustration: Jill Gregory. Source: nature.com 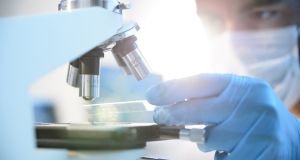 The research may help explain the basis for other medical phenomena, such as the effectiveness of acupuncture and where lymphatic fluid originates.

Scientists in the US have identified a new human organ hiding in plain sight, in a discovery they hope will help understand how cancer spreads within the human body.

Layers long thought to be dense, connective tissue are actually a series of fluid-filled compartments, which researchers have termed the “interstitium”. Its existence was demonstrated using a new technique for generating images from inside the human body.

These compartments are found beneath the skin, as well as lining the gut, lungs, blood vessels and muscles, and join together to form a network supported by a mesh of strong, flexible proteins. Analysis published in the journal Scientific Reports is the first to identify these spaces collectively as a new organ and try to understand their function.

They realised traditional methods for examining body tissues had missed the interstitium because the “fixing” method for assembling medical microscope slides involves draining away fluid – therefore destroying the organ’s structure.

Instead of their true identity as bodywide, fluid-filled shock absorbers, the squashed cells had been overlooked and considered a simple layer of connective tissue, they concluded.

“It’s a fluid cell highway,” Dr Theise explained in an CNBC interview. “When [cancerous cells] get into this layer, that’s when they spread.”

The organ’s structure and functionality may help researchers learn why certain types of cancer - such as skin, breast and stomach cancers - spread and lead to improved treatments against aggressive cancers.

Dr Robert O’Connor head of cancer research at the Irish Cancer Society said the research opens up the possibility of better understanding of some diseases and the movement and spread, known as metastasis, of cancer cells.

The paper describes “an interesting new understanding on human anatomy” where a new technique (Confocal Laser Endomicroscopy) allows for a virtual biopsy of tissue inside in the living body without damaging those cells.

“Using this method the researchers better characterised the structure and role of tissues immediately under lining cells of the major organs of the body such as the skin, digestive tract etc,” he said.

Cancer researchers have known for a long time that many cancers can spread from their starting point through special channels called lymphatic vessel into lymphatic glands and then into the bloodstream to move to new areas of the body, he explained.

“In describing this new layer of organised cells, the ‘interstitium’, the researchers realised such tissue is the immediate route for cancer cells to leave their origin and migrate into the lymphatic vessels,” he said.

It was also known that cells immediately around tumours can be incredibly important in supporting and fostering the growth and spread of tumour cells in the body, Dr O’Connor said. “Indeed, some common cancer treatments may have some of their effects through targeting this supportive tissue, as well as killing the tumour cells themselves. This more detailed characterisation of this sub region of the body may open up new areas for better understanding of some diseases and indeed the movement and spread (metastasis) of cancer cells.”

Dr Theise said he hoped that if the cells were entering the bloodstream via the interstitium, they may leave a trace of protein in the fluid surrounding much of the body. Doctors could then sample this fluid and test for cancerous cells before they reach the lymph nodes and become terminal.

The research may also help explain the basis for other medical phenomena, such as the effectiveness of acupuncture and where lymphatic fluid originates.