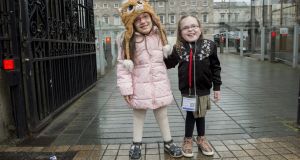 The HSE has agreed to pay for two children to receive the only medicine available to treat their rare disease.

They have been without Vimizim since last month following a dispute over its cost, but they and their families are overjoyed at the HSE now agreeing to pay for it.

Grace McIntyre (10), from Leitrim and Cezy Focsa (12), from Kilkenny, have Morquio, a form of Mucopolysaccharide disease (MPS) which causes lifelong problems including heart disease, skeletal abnormalities, vision and hearing loss, and respiratory issues.

Vimizim is the only medicine available to treat the condition and it replaces the enzyme that their body is missing.

The girls initially received it over 5 years ago, as part of clinical trials, and afterwards pharmaceutical company BioMarin provided it on compassionate grounds. But last year, the company said it could no longer provide it free to the girls. The drug is reported to cost €400,000 per person annually, and the HSE initially said they could not fund it due to cost. The cost now agreed by the HSE and BioMarin is not known.

The girls and their families campaigned for Vimizim to be made available to them through the HSE.

On Thursday, the families were told by their medical team in Temple Street that it had been approved.

“It is the most amazing news,” said Barbara Frow McIntyre, mother to Grace.

Cezy’s mother, Elena Focsa said they were delighted to get the good news.

“We are very happy for Cezy and for Grace to be back on track with Vimizim,” she said.

“It was a very stressful situations for us as a family. Cezy was with out medicine for almost two months. We can’t believe we’ve received the most amazing news for us. It’s even better than the Easter Bunny!”

She said they were “extremely thankful to the HSE” and the family could finally get back to “some kind of normal life”.

“The relief hasn’t even sunk in yet, it’s like a dream. It’s all we’ve been able to think of since August last.

“Grace is over the moon with joy now she’s got her meds back and even the needles again haven’t phased her. She’s planning a bit of a party when school’s back.”

She said that throughout their fight for continued access that, “Grace has always been our main driving force.”

A spokeswoman for the HSE said following negotiations over the past six months, “the manufacturer has provided a revised offer that involves a significant benefit to the State and has reached a threshold that allowed approval by the HSE Drugs Committee”. she said finalisation of contractual terms is underway.

On its Facebook page, the Irish MPS society said, “After a long 12 months of campaigning & lobbying our TD’s and Senator’s we are delighted to announce that all our hard work has paid off.”