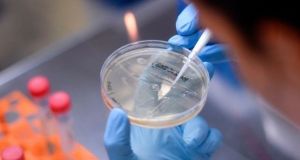 Ibec has called for publication of the evidence that is underpinning the latest recommendations. File photograph: Douglas Magno/AFP via Getty

The recent rise in Covid-19 cases outside Dublin has been described by an infectious diseases consultant as “really shocking” .

“We have to do something as a nation as we can’t allow the rise to continue,” Prof Sam McConkey said on Sunday night.

He said efforts to encourage people to take voluntary action to reduce incidence of the disease and to test and trace confirmed cases to slow the spread “have not worked”, which left a move to Level 5 restrictions looming.

It was, he added, “a no-brainer” to make the move but would “require a massive public by-in .

Speaking on RTÉ’s Today with Claire Byrne on Monday, Prof McConkey added: “My view is that we need to take dramatic action quickly, to prevent the gradual ongoing rise in cases, not just in Dublin, in all the other 25 counties.

“It’s not even a case of whether we do this or not, if we don’t do it now, we’ll be doing it in two or four weeks when you’ve more people in hospital and more deaths. We could wait for 900 people to be hospitalised rather the 150 we have now. That would probably replicate the number of deaths and chaos that we had back in March and April.”

Prof McConkey said that even if the State had three times the number of ICU beds, treatment of Covid-19 “is not good enough to solve this problem, it’s a prevention issue, prevention is better than cure”.

“We’ve got to prevent this epidemic spreading widely through large numbers of our population in my view rather than just saying let us all get it we’ll get sick and the health system will look after us, it’s not possible to have a good enough hospital system to look after everyone.

“I’ve been saying for weeks, we’re at the beginning of a second wave, we need to take dramatic action to stop this, we need to be effective at preventing the increasing number of cases ... we need to take action that is adequate enough to stop the rise. So far we haven’t done that.”

Prof McConkey said those who had said severe restrictions would further damage the economy should realise that “if the virus continues to spread the economy will be shattered anyway”.

He said that “there has to be co-operation with the authorities” in Northern Ireland also on the matter.

“The area around Derry and Strabane has the highest rates (of Covid-19 infection) in the whole of the United Kingdom, ” he said, adding that “there is a need for political leaders (in both jurisdictions) to come out together on this”.

Prof McConkey encouraged people across Ireland to believe “we can fix this”.

“It’s not as bad as it was last March and by May, June it was fine. We can do it again.”

Dr Mary Favier, a former president of the Irish College of General Practitioners (ICGP) and a member of NPHET, said that the “absolute reality” and “inevitable truth” of the current Covid-19 figures was that a lockdown would be necessary because of the vulnerability of the healthcare system.

“Something needs to be done to protect it,” she told RTÉ radio’s Morning Ireland on Monday.

She said that if the case numbers continued at their current trajectory, there could be 1,500 cases per day by the beginning of November and hospitals would be at full occupancy. The health system is already under strain dealing with Covid-19 cases and other forms of healthcare, she said.

“GPs are concerned at what this winter is going to look like. It’s not just a fear, it’s a reality,” she said.

Dr Favier said there was a concern that if there was a serious traffic accident or a cardiac incident that there would not be an ICU bed available due to the number of Covid-19 patients.

Moving to Level 3 in Dublin and Donegal had made “some difference” but not enough, she added. However, Dr Favier said she was particularly concerned about the impact of a further lockdown on vulnerable groups and those with mental health issues.

Prof Anthony Staines, a Dublin City University academic and public health expert, said it was clear “Covid-19 is out of control and is rising across the whole country.”

“That’s been clear for some time, but whether we should be starting with Level 5 is a different question,” he told Newstalk Breakfast.

Infectious diseases expert Prof Jack Lambert said the enforcement of preventative measures was very important and that people needed to be compliant.

He told Newstalk Breakfast that the wearing of masks, maintaining social distance and all preventative measures needed to be enforced.

Teaching unions have raised questions about the prospect of schools remaining open during Level 5 restrictions as they have called for safety reviews.

The Association of Secondary Teachers, Ireland (ASTI), the Teachers Union of Ireland (TUI), and the Irish National Teachers Organisation (INTO) have all called for clarity on what protection is available to their members.

Reacting to the NPHET’s recommendation, Ibec chief executive Danny McCoy said given the seriousness of it for the economy and society, the Government’s senior officials group must publish the evidence that is underpinning these recommendations.

The Restaurants Association of Ireland said recommending a move to Level 5 was “surprising, unexplainable and economically unreasonable” given many counties were doing well to contain the disease.

Fianna Fáil TD Jim O’Callaghan criticised what he said was inconsistency from NPHET in its advice and questioned why it had recommended such a sudden move to Level 5.

Retailers have said they fear Christmas could be derailed if the Government accepts the recommendation from NPHET, which would force all but essential retail to close for the rest of October.