Confusion and anger in Irish businesses at call for lockdown 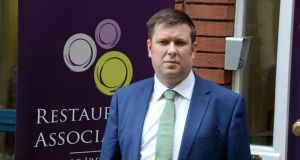 Irish businesses have reacted with anger and confusion to the news that the Government is considering a return to full lockdown in order to try and get the Covid-19 pandemic back under control following recent spikes in the number of infections.

The coalition party leaders are to meet chief medical officer Tony Holohan on Monday to discuss the public health recommendation as the State fights to get Covid-19 numbers back under control.

The National Public Health Emergency Team (NPHET) on Sunday recommended that the whole country be moved to the highest level of restrictions in the Government’s Covid-19 roadmap amid concern over the spread of the disease and rising numbers in hospitals.

Retail Ireland, the Ibec group that represents the retail sector, said any move to close significant swathes of retail as part of new Covid restrictions would have a “devastating impact” on thousands of businesses and jobs.

It said non-grocery trade would move almost exclusively online in the run up to the key Christmas trading period, with the majority of spending leaving the country.

Retail Ireland director Arnold Dillon said the news that a widespread retail lockdown was under review was “a major shock”.

“The economic and social costs would be enormous, thousands of businesses and jobs would be at risk,” he said.

“This must be avoided. No evidence has been presented that retail settings are a significant cause of Covid transmission.

“In fact, the sector has radically transformed how it operates, with face masks, social distancing and other hygiene measure, to ensure a safe and highly controlled environment for customers and staff.

“We need to be able to manage the threat of Covid through targeted restrictions, while also sustaining economic activity and jobs. The retail sector has clearly demonstrated that this can be done.”

“The fight against Covid-19 will be a long war, not a short battle,” he said. “Our public health guidance must therefore indicate to Government how best to maintain some element of social and commercial normality.

“We believe this would improve compliance rates among the general population with Covid-19 control measures. We cannot yo-yo between levels on a weekly basis. There is a real risk to social cohesion from people who see their jobs disappearing as their employers fold.”

The Restaurants Association of Ireland has described the recommendation by NPHET as “surprising, unexplainable and economically unreasonable considering so many counties are doing extremely well in the fight against Covid-19”.

Adrian Cummins, the group’s chief executive, said: “Government must decide if Ireland can live with Covid as outlined in the plan to tackle the virus or will they plunge the country into an economic lockdown as requested by NPHET.”

A spokesman for the Construction Industry Federation said builders had demonstrated they can operate close to capacity safely.

“In the coming difficult economic period, the wider economy needs, insofar as it is safe, the construction industry to continue operating,” he said.

“Every week, the industry is generating much needed revenue for the exchequer and providing employment to hundreds of thousands of people. Our members and their employees are then spending wages and profits within the economy.

“In addition, construction activity means the houses, hospitals, specialist buildings and other infrastructure that make the economy competitive and attractive to FDI continues to be built.”

He added that any move to increase restrictions should be accompanied by “a clear indication that construction can remain operational where it is safe to do so”.

“Ambiguity in the past has seen the industry have to cease operations due to safety, contractual and logistical concerns,” he said. “As we try to rebuild our economy, this would be in nobody’s interest.”

Ibec chief executive Danny McCoy said it was “intolerable” that businesses were getting vague and changing criteria in terms of the restrictions.

“Given the seriousness of the NPHET recommendation for our economy and society, the Government’s senior officials group must seek, review and publish the evidence that is underpinning these recommendations,” he said.

“It is intolerable that after six months we are still receiving both vague and changing criteria to advance such serious restrictions.”

Meanwhile, Mark Redmond, chief executive of the American Chamber of Commerce Ireland, said the Government must continue to communicate with businesses.

“Even though Ireland has 0.06 per cent of the world’s population we are the world’s fifth biggest producer of Covid-related products,” he said.

“Supply has been maintained – and in many areas significantly increased – thanks to clear decision making by Government and sustained consultation on the impact of these decisions.

“As Government considers advice to significantly raise nationwide restrictions, we urge for continued consultation with industry to ensure the necessary time is given to business to prepare and communicate with employees and key stakeholders when a change of this significance is being considered.”

Dermot O’Leary, chief economist at Goodbody, said the recommendation to move to lockdown “looks like a disproportionate response”.

“It has put the government in an extremely difficult situation,” he said. “This highlights how vulnerable the economy is to public health decisions.

“Up to recently, the recommendations coming from NPHET have been accepted in full, but there already appears to be real political opposition to this latest piece of advice.

“Given the likely economic impact, a wholesale reconfiguring of supports would be necessary. With next week’s budget preparations in the final stretch, taking NPHET’s advice would significantly change the short-term priorities.

“We are not health experts but the move to a full lockdown, involving all non-essential businesses, seems disproportionate given what we know about the science of the virus at this point. At the very least, the data to support such a decision should be published in full.”