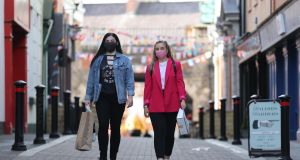 Young women shopping in Derry over the weekend. The Stormont Executive announced a wide-ranging series of restrictions for the Derry City and Strabane Council area on Thursday in an effort to stem the spiralling Covid-19 infection numbers in the northwest of Northern Ireland. Photograph: Liam McBurney/PA Wire

A “circuit breaker” lockdown to curb Covid-19 in Northern Ireland is almost inevitable if the sharp rise in the incidence of coronavirus cases in the North continues, a senior medical adviser has warned.

Dr Gerry Waldron of the North’s Public Health Agency made his comments on Sunday on a day when a further 462 confirmed cases of Covid-19 were reported by the North’s Department of Health, taking the total number of cases to 14,074.

One further death was reported, bringing the number of deaths to 584. On Saturday the department reported 726 new confirmed cases in its daily bulletin, with one additional Covid-19 death. This means there were an additional 1,188 new cases over Saturday and Sunday in the North.

While these daily figures are below the record number of 934 positive tests reported on Friday, they are causing great concern to senior doctors and politicians.

The North’s Minister for Finance Conor Murphy said the Northern Executive might have to look at a stringent “circuit breaker” lockdown, adding it would be preferable if this happened on an all-island basis.

In total in the past seven days there have been 3,289 confirmed cases of the virus in the North, with 733 of them in the Belfast council area, 731 in the Derry and Strabane area, 521 in Newry, Mourne and Down, and 266 in Mid-Ulster.

While the caseload is high, the numbers of patients in hospital are relatively low, although health experts cited a lag between the rise in cases and admissions to hospitals.

On Sunday 75 patients were receiving hospital treatment for Covid-19, with nine of them in intensive care units and seven on ventilators.

Dr Waldron said with the rise in cases in recent days, the “circuit breaker” was being “considered and talked about”, and the Northern Executive would be examining whether such a move was necessary.

Such a circuit breaker measure is likely to be a two- or three-week period of heavy restrictions to try to limit the spread of Covid-19.

“If the numbers continue to ramp up as we have seen, I think it is almost inevitable that is the way we will be heading,” he told the BBC.

“We’ll just have to brace ourselves and see how things pan out over the next few days and the next week,” added Dr Waldron.

The Executive is understood to be considering a two- or three-week lockdown around Halloween at the end of the month.

Mr Murphy said if it was evident that local restrictions, such as those currently applied in the Derry and Strabane area, did not bring down the infection rate, the Executive would have to look at more stringent options, including the circuit breaker.

“Within the next week or two, if we are not seeing a serious reduction in relation to that, then we will have to consider further steps,” he said.

Mr Murphy said he would prefer, if such a move were necessary, that it would apply on an island-wide basis, and that it would also happen in Britain.

“We have to look across the island as well because a measure such as that, which will be quite severe to take effect, has to be one which carries right across the island because as we know the virus does not respect any borders,” he told the BBC.

The Newry and Armagh Assembly member said it was logical that such a lockdown should apply across Britain and Ireland for it to be most effective.

“The Border is very, very fluid. If you have a set of restrictions on one side of the Border and not on the other then that weakens the impact of those restrictions,” he said.

“Similarly there is quite a lot of traffic between this island and Britain, and so to have the most effective circuit breaker… it would be most effective if it is right across these islands.”