The week in detail: What the president did, where he went and who he was with

US president Donald Trump and first lady Melania Trump have tested positive for coronavirus. Video: The White House/ As Credited 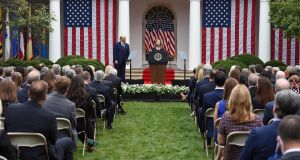 Donald Trump’s coronavirus diagnosis has sparked a scramble to find out who else in his circle may have been infected. The ceremony to announce Amy Coney Barrett’s nomination as a supreme court justice on Saturday, September 26th, at the White House is being examined as a possible “superspreader” event, but the US president’s potential exposure to infected people may have gone back further.

Here’s a timeline of Trump’s movements in the week before his admission to the Walter Reed Medical Center on Friday.

Friday, September 25th: Trump holds a fundraising event at his hotel in Washington. He arrives at 6.30pm and stays exactly an hour. Ronna McDaniel, chairwoman of the Republican National Committee, is present. She will later test positive for the virus.

Saturday, September 26th: The ceremony announcing Barrett’s nomination is held in the White House Rose Garden in the afternoon. Beforehand, the president and first lady Melania Trump host Barrett, her husband and their seven children in the Oval Office. Footage of the main event shows guests hugging and mingling; at least eight of those present, including Kellyanne Conway, two Republican senators and Trump campaign manager Bill Stepien, later test positive. After the main outdoor ceremony, a reception is held inside where Trump mingles with guests. In the evening, Trump flies to Pennsylvania for a rally. At least one member of the White House press corps who travelled on Air Force One that evening subsequently tests positive.

Monday, September 28th: Trump gives an update on the coronavirus testing strategy at an afternoon press conference in the Rose Garden. He spends much of the day preparing with Christie and others in the White House Map Room for the first debate with his Democratic opponent for the presidency, Joe Biden. Christie later confirms that none of the five or six people in the room was wearing a face mask.

Tuesday, September 29th: Trump flies to Cleveland, Ohio for the first presidential debate. Melania and his adult children are among those who travel on Air Force One, as well as advisers including Hope Hicks and Stephen Miller. Trump’s invited guest, Alice Marie Johnson, who was released from prison after she was granted a pardon by the president, also flies on the presidential plane. During the debate, Trump shares a stage with Biden for 90 minutes, though the two men stand about four metres apart.

Wednesday, September 30th: Trump flies to Minnesota for a private fundraiser and then a campaign event, attended by about 3,000 people. Though the rally is in many ways a typical Trump event – he assails local congresswoman Ilhan Omar and warns that refugees will “flood” the state if Biden is elected – his speech is about half the usual length. Hicks reportedly begins to show Covid-19 symptoms and is isolated on the back of the plane when returning to Washington. Three congressmen from Minnesota also fly to and from the event with Trump.

Thursday, October 1st: Trump flies to New Jersey at about 2pm to attend a roundtable with supporters and a fundraiser at his Bedminster golf course. White House chief of staff Mark Meadows said they learned of Hicks’s diagnosis just as they were taking off. It appears that the president is tested at some point on Thursday afternoon. That evening he phones into Sean Hannity’s Fox News show and confirms Bloomberg’s report that Hicks has tested positive, and says he is awaiting the results of his own test. Shortly before 1am he tweets that he and the first lady have tested positive for coronavirus.

Friday, October 2nd: Trump does not tweet or make any public appearances during the day. He misses a scheduled phone call with state governors, for which vice-president Mike Pence steps in. Shortly after 6pm he is taken to the Walter Reed Medical Center, just north of the White House. Later it is reported that he was administered oxygen earlier in the day at the White House. He is expected to remain at the facility for several days.