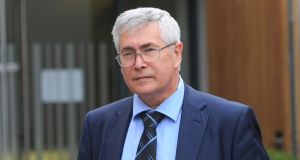 Dr Peter Van Geene was the subject of a fitness to practise hearing in 2015, after allegations were made against him by four women patients at Aut Even private hospital in Kilkenny. File photograph: Gareth Chaney/Collins

An obstetrician who was previously found guilty of poor professional performance has had a fresh finding made against him by the Medical Council.

Dr Peter Van Geene contravened the Medical Practitioners Act 2007 by failing to maintain his professional competence, the fitness to practise committee of the Medical Council ruled on Friday.

The committee found he failed to comply with the council’s professional competence requirements for the period May 2017 to April 2018. The council will decide at a later date what sanctions, if any, to impose.

Dr Van Geene, an obstetrician and gynaecologist who previously practised in Kilkenny, was the subject of a nine-day fitness to practise hearing in 2015, after allegations were made against him by four women patients. He was found guilty at that time on two counts of poor professional performance, but was cleared in relation to 13 other allegations.

The allegations related to patients who underwent hysterectomies between 2009 and 2011 at Aut Even private hospital in Kilkenny. It was found he failed to review one of the women, Helen Cruise, before her hysterectomy, failed to explain to her the risks involved and communicated with her in an incorrect manner.

In 2016, the Medical Council refused to say what sanction, if any, it had imposed on Dr Van Geene, as “it was not in the public interest to do so”.

Friday’s fitness to practise hearing, which was not attended by Dr Van Geene, heard that in 2017 a Medical Council audit established that he was not maintaining his professional competence, as all doctors are required to do. It was established he had been registered on the Institute of Obstetricians’ professional competence scheme between 2011 and 2014, but not since then.

Officials contacted Dr Van Geene, suggesting he had the option of voluntarily withdrawing from the register of the Medical Council.

However, Dr Van Geene told them he was not in a position to voluntarily withdraw because he was not practising in Ireland and was therefore not required to enrol in the professional competence scheme.

Eoghan O’Sullivan BL, for the CEO of the Medical Council, said Dr Van Geene was incorrect in his understanding, and just because a doctor was not practising did not mean he or she did not have to maintain professional competence. There were no special requirements on doctors who were working less than part-time or on an occasional basis, he added.

All further attempts by Medical Council staff to contact Dr Van Geene, who has an address at St Mullin’s in Co Carlow, have proved unsuccessful, the hearing was told. His landline and mobile were both disconnected. A neighbour who was collecting his post said he had moved to the UK.

Announcing the decision, Dr Suzanne Crowe, chairwoman of the fitness to practise committee, said the allegation against Dr Van Geene was proven as to fact. The committee was satisfied he knew he needed to be enrolled on a professional competence scheme in order to remain on the register.

Dr Van Geene received his primary medical degree in 1981 in London. He completed training in gynaecological oncology and worked at Guys and St Thomas’ hospital as a consultant gynaecology cancer surgeon.

He began to look for work in Ireland in 2005 after his wife narrowly escaped being caught up in the London Tube bombing that year, it was previously reported. She had been due to get on a train that exploded but ended up getting the following one. He worked as a consultant gynaecologist at Aut Even hospital from June 2006 to November 2011.