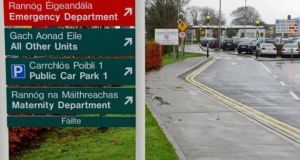 Patients continue to receive a full selection of hot meals in UHG with one change which is that the main hot meal is served in the evening, rather than at lunchtime. File photograph: Eric Luke

The kitchen at University Hospital Galway, which caters for hundreds of patients, has been indefinitely closed following the discovery of a dead mouse.

The hospital said pest control contractors had recently detected the possible presence of rodents when bait was interfered with.

Last Sunday, “a single dead mouse was found”, it said, following recommendations by the HSE that a deep-clean and further inspections be carried out on site.

The mouse was discovered in the kitchen near an emergency exit.

“This has been an isolated incident and all inspections since this date have been clear,” it said in a statement.

However, it gave no specifics on when kitchen operations might resume but said works were ongoing to achieve this as “quickly as possible”.

“Following advice from the HSE’s Environmental Health Team and to minimise the impact on patients and for continuity of service we moved food production to the other hospital site in Merlin Park last Sunday,” it said.

“Patients continue to receive a full selection of hot meals in UHG with one change which is that the main hot meal is served in the evening, rather than at lunchtime.

“Our priority is to ensure the highest environmental standards while minimising the impact on our patients.”

The Food Safety Authority of Ireland (FSAI) said it is not aware of the incident.

Mary Daly, managing director of The Food Safety Company, a nationwide consultancy, said the response was entirely proportionate and in keeping with legislation. She said rodent infestation or activity was “one of the predominant aspects of food safety” and that almost half of all enforcement orders issued by the FSAI last year were related to the problem.

“There is never a mouse on their own. They are highly prolific and difficult to catch,” she said.

In such cases, she explained, business owners typically follow a three-step process: eliminate shelter and food; pest-proof the building; and destroy the problem.

“It should really just be a 24-hour [process]. I would think it wouldn’t take any longer than that,” she said.

“It’s environmental. What has happened in recent times is that there is very strict regulations about pesticides. That’s quite a new development and I think it’s why we are seeing more and more cases of rat infestation around the country.”

In January last year, a closure order was served on a kitchen at Our Lady’s Hospital in Navan after a dead rodent was found trapped underneath a sink unit and fresh rodent droppings were discovered in a press.

University Hospital Galway said it has a significant level of pest-control measures in place.

“This is an important programme as many of the buildings on both campuses were constructed originally in the 1950s,” it said.

The FSAI said food service outlets including hospital kitchens are inspected by the Environmental Health Service of the HSE.

“FSAI has not been notified to date by the Environmental Health Service of the service of an enforcement order on this premises.”