‘If you are using your reliever inhaler several times a week, you are over-reliant on it’ 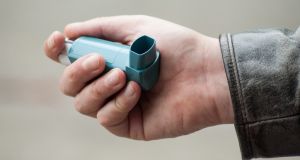 The use of 12 or more is an indication someone is at risk of an asthma-related death. Photograph: Getty Images

Almost a third of asthma sufferers are at risk of dying from the disease due to an over-reliance on reliever inhalers, according to new research from the Asthma Society of Ireland.

The research, conducted by hmR Ireland, examines the over reliance on reliever inhaler medication by people with asthma in Ireland.

Seven in ten asthma sufferers are using more than three reliever inhalers a year. Within five years of diagnosis, half of the asthma population are over reliant on their reliever inhaler.

The research also showed a trend where reliever over-use scales up dramatically after the first year and is very high by five years after initial diagnosis.

Sarah O’Connor, chief executive of the Asthma Society of Ireland said the research revealed that a “huge proportion” of people in all age groups are overusing their reliever inhalers throughout the country, “putting them at risk of an asthma severe exacerbation or asthma related death”.

“If you are using your reliever inhaler several times each week, you are over-reliant on it and your asthma is not controlled,” she said.

“The exception to this is people with asthma who participate in sport/exercise, where it is still recommended you use your reliever inhaler prior to warming up before exercising.”

Marcus Butler, medical director of the Asthma Society of Ireland, said: “A reliever inhaler works within minutes to relieve asthma symptoms when they happen – it gives a short-lived improvement in symptoms, effectively just buying time, but can eventually fail to keep a patient safe from asthma if more appropriate and effective controller inhalers are not used on a daily basis.

“A controller inhaler works over a much longer duration than reliever inhalers to eventually ease the underlying airway inflammation which ultimately causes asthma symptoms. It prevents symptoms from arising several weeks and months down the road, as long as it is habitually taken.”

The Asthma Society of Ireland is launching a SafetyCare campaign on Tuesday, an initiative aiming to end asthma deaths in Ireland by making patients and public aware of asthma management issues.