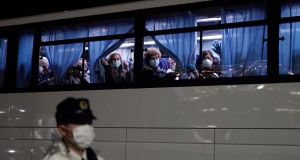 US citizens wave from a bus as they leave the Diamond Princess cruise ship in Yokohama on Sunday night. Photograph: Franck Robichon/EPA

Irish passengers trapped on a cruise ship off Yokohama in Japan for the past fortnight because of the coronavirus are expected to be evacuated after the Department of Foreign Affairs said it was examining proposals for them.

The United States on Sunday began taking its citizens off the Diamond Princess. Canada, Italy, South Korea, Australia and Hong Kong were also making plans for their citizens among the 3,700 passengers and crew.

In response to queries about the possible evacuation of at least two Irish passengers, a department spokeswoman said: “We are working with other like-minded countries.”

She added the Irish passengers, believed to be a couple from Co Meath, were receiving consular assistance. They were expected to face another two-week quarantine period once off the ship.

The Japanese authorities had said the results of tests for the virus performed on everyone on board would be available by Friday, when staggered disembarkations could begin. However, the US authorities had begun to take about 400 of its citizens off the ship on Sunday.

Some 355 cases of the coronavirus have been confirmed among the ship’s passengers, including 70 on Sunday. All of the ill have been brought ashore to hospitals.

About 420 cases of the virus have been officially recorded in Japan, including one fatality - making it host to the worst outbreak outside China. Japan’s government admits it is increasingly struggling to keep track of new infections.

Five people, including a doctor and his wife, have come down with the virus at a hospital in Wakayama Prefecture, hundreds of kilometres from Yokohama. The government has revealed a cluster of eight new cases in Tokyo, most apparently infected by the same taxi driver.

“Japan seems to have entered a new phase where the infection route of several new cases is unclear,” health minister Katsunobu Kato warned on Monday.

The US was the first country to remove its citizens from the stricken liner. On Monday morning, about 340 Americans were flown by chartered flight to California and Texas, where they will be quarantined for two weeks at military bases.

A total of 40 Americans have reportedly been infected on the ship. Some have been transferred to hospitals in Japan but 14 who have the virus but no symptoms were controversially allowed to fly home in what the US Department of State called a “specialised containment area on the evacuation aircraft”.

Matthew Smith, an American passenger who decided to stay on the Diamond Princess tweeted on Monday: “OMG: US Gov’t said they would not put anyone on planes who was symptomatic, and they ended up knowingly and intentionally putting on 14 people who actually have the virus. Decision not to be evacuated = best decision ever.”

The remaining passengers, most of whom are aged 60 or older, are scheduled to be released from quarantine in stages from Wednesday.

Experts fear the Covid-19 crisis could begin to overwhelm Japanese medical facilities if it spreads. One hospital in the western suburbs of metropolitan Tokyo was forced to stop treating outpatients on Monday after a nurse fell ill. The nurse had been treating an elderly woman who died last week.

The Japanese government is taking increasingly severe measures to keep the disease at bay. On Monday it cancelled public celebrations for the birthday of Emperor Naruhito later this week. Tokyo’s Marathon, which is scheduled for March 1st and expected to draw 38,000 runners, has also been curtailed.