About 1,500 staff represented by Siptu and Fórsa begin 24-hour stoppage on Friday 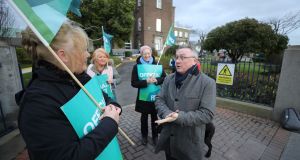 Chris White (right), CEO of the NCBI, speaks to demonstrators at the strike on Whitworth Road in Dublin on Friday. Photograph Nick Bradshaw for The Irish Times 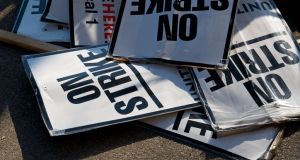 The 24-hour work stoppages by members of the trade unions Siptu and Fórsa will affect 10 organisations - known technically as Section 39 bodies - in various parts of the country, including the National Council of the Blind In Ireland, South West Doctors , Galway Rape Crisis and Western Alzheimers. 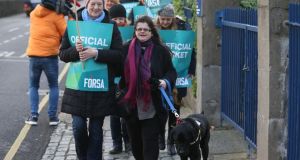 Further strike action by workers in State-funded organisations providing health and social services is inevitable unless they receive restoration of pay cuts at the same pace as public servants, unions have warned.

About 1,500 staff represented by the trade unions Siptu and Fórsa in what are known technically as Section 39 organisations began a 24-hour stoppage on Friday morning as part of a campaign to secure the reintroduction of pay which they lost following the economic crash.

The organisations concerned receive grant aid from the HSE to provide services. While the staff are not considered to be public service personnel, unions argue that they experienced pay cuts similar to direct State employees.

Among the organisations hit by the strike on Friday were the National Council of the Blind In Ireland, South West Doctors, Galway Rape Crisis and Western Alzheimers.

A strike planned by home helps in Dublin on the same issue was called off on Thursday while a stoppage originally scheduled at Camphill in Wexford did not go ahead. Siptu said an engagement on pay was underway.

Speaking at the picket line at the National Council of the Blind in Ireland (NCBI) in Dublin the general secretary of Fórsa Kevin Callinan said the workers in Section 39 organisations were “preparing to make sure that the in-coming government has to deal with this unfinished business”.

“That means if we do not get an agreement to restore the pay of these workers at the same pace as the rest of the public service then industrial action is inevitable.”

“We thought we had an agreement with the Government brokered at the Workplace Relations Commission but they reneged on that agreement. So we will be saying to any incoming government that this needs to be fixed and fixed quickly.”

Mr Callinan said many of the Section 39 organisations were supportive of their staff involved in the campaign for pay restoration.

“The Government used the 2009 [financial emergency] legislation to cut their pay just as they did to all public servants but are refusing to restore pay as public servants are getting their losses back.”

“The State relies on various organisations to provide key public servants. When it came to cutting pay,they cut the pay of the workers in these services but they seem to have a problem in restoring their pay.Really a State that treats workers so unfairly is an unjust State.”

Mr Callinan said many of the Section 39 organisations could not understand how their staff were treated as public servants one day but the next day were ignored.

“That is unacceptable”, he said.

Out of hours medical cover in Cork and Kerry looks set to be affected by the Siptu action tonight when up to 50 Siptu members in 25 centres go on strike.

South Doc, which is headquartered in Killarney, Co Kerry, provides out of hours GP cover from 6pm at the majority of its centres in Cork and Kerry until 11pm. It also provides through-the-night cover at a smaller number of centres including two in Cork city, Blackpool and Kinsale Road.

Union members at the 25 centres provide reception and driving services to doctors.

Liam Allen of Siptu’s health division said members will be withdrawing their services from South Doc.

“Our members in South Doc are private employees but their wages have always been funded by the HSE and the Dept of Public Expenditure and Reform and they always had a pay relationship with their colleagues directly employed by the HSE so they got the same pay cuts as everyone else,” he said.

“But they haven’t got pay restoration of the 5pc pay cut plus there’s been an incremental pay freeze so if you include those missed increments, their pay has been cut by 7-8pc - in fact over the last ten years, they’ve seen no pay increase save for a 1pc pay rise just over two years ago.”

Mr Allen said South Doc as an employer was happy to embark on pay restoration once it received funding from the HSE and DPER and has pledged to pass on the money once it is received from central government.

The HSE said it regretted that industrial action was undertaken as it would affect patient and client services.

Asked whether agencies where services were affected as a result of the strike would lose out on funding under its service agreement with the HSE, the health authority said:

“The HSE very much values the work of these important providers of health and social services and will approach this matter in a spirit of partnership .”

“In many instances cost avoidance due to a one day stoppage is minimal and the impact of this action is variable locally.”

“However the issue will be raised in the context of Compliance meetings with providers.”

The Labour Party on Friday said the incoming Government must restore pay for Section 39 workers.

Labour Party health spokesman Alan Kelly said: “The current Government has spent years boasting about of the success of a growing and stable economy while it denies vital pay restoration to thousands of workers in Section 39 organisations.”

“It’s beyond time for Minister to engage with Section 39 workers and ensure this situation is resolved. Neither recent budgets nor the HSE service plan have addressed this problem.”

Siptu has warned there could be stoppages in other Section 39 organisations in the weeks ahead.

There are about 300 Section 39 organisations which provide services on foot of grants paid by the HSE. A deal was reached last year for the restoration of pay in an initial 50 of these bodies including the home help providers.

However it is understood that the HSE does not have the money to fund the estimated €7 million cost of restoring pay in the remaining 250 Section 39 organisations. In its service plan for this year the HSE said it would engage with the Workplace Relations Commission “in relation to the feasibility of extension beyond the (original) 50”.

One of the Section 39 organisations where staff went on strike, the National National Council for the Blind of Ireland (NCBI), criticised the HSE on Thursday and said the stoppage was inevitable due to the lack of pay restoration.

It said the strike would impact on its ability to deliver services to blind and visually impaired people, with assessments and other activities being postponed.

NCBI chief Chris White said: “We understand why our staff are taking this action as we have tried multiple avenues to resolve this with the HSE but to no avail.”

Siptu health division organiser Paul Bell, said strike action was the only option left open to members to get policy makers and those who fund the services to take notice.