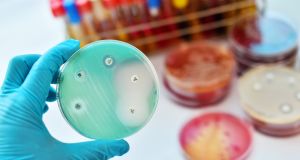 To find new antibiotics, the researchers first trained a “deep learning” algorithm to identify the sorts of molecules that kill bacteria

A powerful antibiotic that kills some of the most dangerous drug-resistant bacteria in the world has been discovered using artificial intelligence.

The drug works in a different way to existing antibacterials and is the first of its kind to be found by setting AI loose on vast digital libraries of pharmaceutical compounds.

Tests showed that the drug wiped out a range of antibiotic-resistant strains of bacteria, including Acinetobacter baumannii and Enterobacteriaceae, two of the three high-priority pathogens that the World Health Organization ranks as “critical” for new antibiotics to target.

“In terms of antibiotic discovery, this is absolutely a first,” said Regina Barzilay, a senior researcher on the project and specialist in machine learning at Massachusetts Institute of Technology (MIT).

“I think this is one of the more powerful antibiotics that has been discovered to date,” added James Collins, a bioengineer on the team at MIT. “It has remarkable activity against a broad range of antibiotic-resistant pathogens.”

Antibiotic resistance arises when bacteria mutate and evolve to sidestep the mechanisms that antimicrobial drugs use to kill them. Without new antibiotics to tackle resistance, 10 million lives around the world could be at risk each year from infections by 2050, the Cameron government’s O’Neill report warned.

To find new antibiotics, the researchers first trained a “deep learning” algorithm to identify the sorts of molecules that kill bacteria. To do this, they fed the programme information on the atomic and molecular features of nearly 2,500 drugs and natural compounds, and how well or not the substance blocked the growth of the bug E.coli.

Once the algorithm had learned what molecular features made for good antibiotics, the scientists set it working on a library of more than 6,000 compounds under investigation for treating various human diseases. Rather than looking for any potential antimicrobials, the algorithm focused on compounds that looked effective but unlike existing antibiotics. This boosted the chances that the drugs would work in radical new ways that bugs had yet to develop resistance to.

Jonathan Stokes, the first author of the study, said it took a matter of hours for the algorithm to assess the compounds and come up with some promising antibiotics. One, which the researchers named “halicin” after Hal, the astronaut-bothering AI in the film 2001: A Space Odyssey, looked particularly potent.

Writing in the journal Cell, the researchers describe how they treated numerous drug-resistant infections with halicin, a compound that was originally developed to treat diabetes, but which fell by the wayside before it reached the clinic.

Tests on bacteria collected from patients showed that halicin killed Mycobacterium tuberculosis, the bug that causes TB, and strains of Enterobacteriaceae that are resistant to carbapenems, a group of antibiotics that are considered the last resort for such infections. Halicin also cleared C difficile and multidrug-resistant Acinetobacter baumannii infections in mice.

To hunt for more new drugs, the team next turned to a massive digital database of about 1.5 billion compounds. They set the algorithm working on 107 million of these. Three days later, the programme returned a shortlist of 23 potential antibiotics, of which two appear to be particularly potent. The scientists now intend to search more of the database.

Dr Stokes said it would have been impossible to screen all 107 million compounds by the conventional route of obtaining or making the substances and then testing them in the lab. “Being able to perform these experiments in the computer dramatically reduces the time and cost to look at these compounds,” he said.

“The work really is remarkable,” said Jacob Durrant, who works on computer-aided drug design at the University of Pittsburgh. “Their approach highlights the power of computer-aided drug discovery. It would be impossible to physically test over 100 million compounds for antibiotic activity.”

“Given typical drug-development costs, in terms of both time and money, any method that can speed early-stage drug discovery has the potential to make a big impact,” he added.–Guardian