Sugary-drink tax to have ‘benefits’ no matter industry response

Major new study on effects of the tax says it will reduce obesity, diabetes and tooth decay 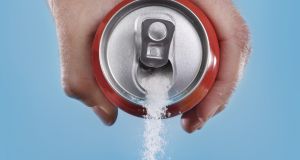 While industry groups have criticised the tax, the study, published in the Lancet Public Health journal, concluded it will have significant health benefits, especially among children

The incoming tax on sugary drinks is likely to reduce obesity, diabetes and tooth decay no matter how the industry responds to the move, a major study has found.

Minister for Finance Michael Noonan said in October’s budget he would introduce a tax on sugary drinks in April 2018. The timeframe is to ensure the Republic will be in line with a similar tax planned for the UK.

While industry groups have criticised the plan, UK researchers have concluded the tax will have significant health benefits, especially among children. The study was published in the Lancet Public Health journal.

The researchers modelled three ways the soft drinks industry may respond to the levy: reducing sugar in drinks; passing some of the levy to consumers by raising prices; and encouraging people to switch to lower sugar drinks.

It found that an industry response focused on reducing sugar content is likely to have the greatest impact on health, with additional benefits if the industry successfully implements either or both of the other options.

The authors estimate that a reduction of 30 per cent in the sugar content of all high-sugar drinks and a 15 per cent reduction in mid-sugar drinks could result in 144,000 fewer adults and children with obesity; 19,000 fewer cases of Type 2 diabetes a year; and 269,000 fewer teeth suffering from decay annually.

Passing on half the cost of the levy to consumers in higher prices for high- and mid-sugar drinks of up to 20 per cent was estimated to reduce the number of adults and children with obesity by 81,600; result in 10,800 fewer cases of diabetes; and 149,000 fewer decaying teeth a year.

Children are likely to benefit most, but the benefits of the tax could be reduced if the industry responds by increasing the price across their entire drinks range, including zero sugar/diet drinks, bottled water, and fruit juice.

The owner of Lucozade and Ribena has already said it will strip out 50 per cent of sugar content in the Irish market ahead of the tax.

Lead author of the study, Dr Adam Briggs of the University of Oxford, said the research “suggests that all of the most likely industry responses to the tax have the potential to improve health by reducing rates of obesity, diabetes and tooth decay”.

The World Health Organization has called on all states to introduce a sugar tax but the move has been criticised by lobbyists. Food and Drink Industry Ireland spokesman Paul Kelly called the tax “populist” and “ineffective” when it was announced.

Prof Richard Tiffin, co-author of the Lancet study, said it showed a “modest but significant impact” on health resulting from the imposition of the levy.

“Childhood obesity is a ticking time bomb and we must now turn our attention to other measures that will bring about the step change in diet that is necessary to truly tackle this issue,” he said.