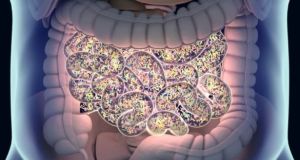 The microbiome is the genetic mix of microbes in the body that mostly live in the human gut. Photograph: iStock

Irish Travellers have a gut microbiome which differs strikingly from that of the non-Traveller settled community, and it confers considerable health benefits on them, scientists in University College Cork have discovered.

The microbiome is the genetic mix of microbes in the body that mostly live in the human gut.

The study, led by Prof Fergus Shanahan at APC Microbiome research institute, helps explain why Travellers are unlikely to get inflammatory conditions such Crohn’s disease, multiple sclerosis and ulcerative colitis.

A modern way of life increases risk of such chronic diseases in part by influencing the microbiome, suggesting the more Travellers settle the more they are likely to get these diseases.

The results are “stunning”, according to Prof Shanahan, in confirming Travellers are a distinct ethnic group. The findings also have global implications in relation to migrants coming from “non-industrialised locations” as they too will lose their microbiome benefits that protect them against “modern” diseases.

Investigators looked at the genetic material of all the microbiota in Irish Travellers i.e. bacteria, fungi, protozoa and viruses living on and inside the human body.

According to Prof Shanahan, the findings challenged the concept of a “normal” or “healthy” microbiome and prompted the question: “What is a normal or desirable microbiome in an ethnically-diverse society?”

“It has implications for Travellers, in how we treat them, and for the settled community,” he said.

While diet is widely believed to influence microbiome, it was not the case in this study. The key factors were large families living in close proximity; exposure to animals in childhood; a nomadic existence and very little inter-marriage. The findings were published in the journal Nature Medicine on Monday.

The microbiome is known to be linked with risk or protection from developing several chronic inflammatory diseases. Until now, studies of its influence on modernisation relied on transcontinental comparisons of different societies, “but the story of the Irish Travellers and the changes imposed on their lives provides important new insights”, he added.

“Moreover, the study raises wider public health concerns for ethnic minorities, including migrants, who are pressured to change their culture and ways of life, which can have unanticipated health consequences.”

While Travellers experienced other chronic conditions including obesity and had a shortened lifespan, Prof Shanahan observed “they have a microbiome I would certainly desire – but they are losing it.”

Moreover, the greater the degree to which the Traveller lifestyle was adapted to that of the settled community, the more their microbiome changed from the non-industrialised type to the industrialised type associated with disease.

Prof Shanahan said he thought there would be difference shown up in the research but did not realise how different Irish Travellers would be. “They are different from any other group in the world, which of itself is important.”

Ethnic minorities are known to have distinct microbiomes, but this study is particularly informative because it is not confounded by genetic and geographic factors.

Prof Shanahan said he has always been intrigued by Travellers and was curious why Crohn’s disease and ulcerative colitis were so rare among them. “I wondered whether Travellers might have a protective microbiome – and so it is.”

Prof Shanahan said the study represented the shared efforts of clinicians and scientists working in partnership with Cork Travellers who not only participated in the study but also influenced its design and planning.” He also expressed gratitude for philanthropic support to enable the research to be done.