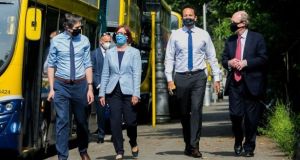 The mandatory wearing of face masks on public transport is unlikely to take effect until next week at the earliest, despite increases in bus and train capacity taking effect from Monday.

This follows an announcement to this effect by the outgoing government last week. This was prompted by concerns about low levels of mask-wearing by people in confined situations where Covid-19 could easily be spread and the need to increase public transport capacity as people returned to work.

However, capacity on public transport was increased on Monday as part of phase three of the Government’s “roadmap” for reopening society after the lockdown, thereby increasing the risk of infection of passengers.

“From Monday, capacity on buses, trains and trams will increase from 20 per cent to about 50 per cent. In conjunction with this move, face coverings will be compulsory on all public transport services,” the National Transport Authority (NTA) stated at the weekend.

On Monday, Ms Graham said the detailed regulation, which would deal with enforcement issues, including fines, and exemptions, was “being worked on at the moment”.

Phase three of the Government’s roadmap says face coverings are “strongly advised”, rather than mandatory.

Asked when the measure would become mandatory, an NTA spokesman pointed out that not all Covid-19 restrictions “have had the strength of law behind them”. Cocooning for over-70s was never a law, he said, while the 2km travel rules only became a law some weeks after it was announced.

The regulation is being drawn up under the provision of the 1947 Health Act used for other Covid-19 related provisions.

Dermot O’Leary, head of the National Bus and Rail Union, said there had been a “very low uptake” of face masks on public transport on Monday.

Mr O’Leary said he was not surprised following the “dithering” of the past number of weeks.

Infectious diseases consultant Prof Paddy Mallon said there needed to be visible enforcement of the rule on public transport as soon as possible.

“This virus moves very quickly and all you need is one person going into a crowded environment to cause a lot of onward transmission,” he told RTÉ Radio.