Peter Boylan says he is being ‘blocked’ from maternity hospital agm 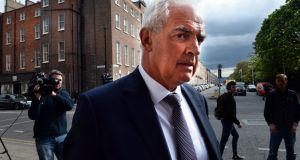 Dr Peter Boylan has been told he can participate in the meeting remotely via electronic platform. File photograph: Brenda Fitzsimons/The Irish Times

Dr Boylan has in recent years campaigned publicly against the plan drawn up to move the hospital to a site at St Vincent’s University Hospital. He plans to restate his objections, along with his call for the head of the board to resign, at the agm.

However, due to Covid-19 restrictions, only a small number of the hospital’s 79 governors, along with key staff, are being allowed to attend the meeting.

The hospital organised a draw to select the governors who could attend, held in the offices of its legal advisers. Fourteen governors applied for the five available places.

Among those not selected were Dr Boylan and another former NMH master, Dr Rhona Mahony. They have been told they can participate remotely, via electronic platform.

‘Nobody is being excluded’

On Sunday, Dr Boylan wrote again to deputy chairman Nicky Kearns seeking to be allowed attend in person “under the principles of natural justice”.

“Critical issues regarding the future of the hospital are to be discussed. I am a former master, a governor of 22 years’ standing and have a close association with the hospital dating back more than 40 years,” he wrote.

“I therefore have both an interest in and a deep knowledge of the NMH and issues relating to clinical and corporate governance in the interests of the safe care of women and their infants.”

A spokesman for the NMH said most governors would be joining the meeting via Zoom and “nobody is being excluded”.

“There is space in the room for the members of the executive committee and for five other governors, in order to comply with social distancing requirements. The five governors attending in person were selected through an independently supervised draw. All governors were made aware of this in advance and none objected.”

The project to relocate the NMH from Holles Street to St Vincent’s is backed by both the NMH and St Vincent’s, but has been beset by controversy, in particular relating to concerns over ethos.

The holding company being established to run St Vincent’s Hospital and the new National Maternity Hospital will be bound by Irish law and not canon law, lawyers for St Vincent’s told the Department of Health last month.

St Vincent’s published the constitution and articles of the new company on its website on Friday.