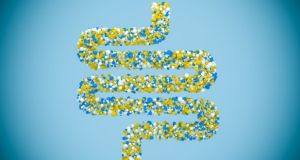 The possibility that the microbiome – the range and number of bacteria living in the gut – might help treat mental illness has become a focus of intense research in recent years. Photograph: iStock

Probiotics that broaden the mix of helpful bacteria in the gut may help to ease depression, according to a review of available evidence.

It provides further indication gut microbes have a major impact on health, including the immune system and brain activity – notably how people think, feel and act – and may, ultimately, provide psychiatric benefits.

The review, conducted by scientists at Brighton and Sussex Medical School and published in BMJ Nutrition Prevention & Health, explores the two-way relationship that exists between the brain and digestive tract, known as “the gut-brain axis”.

The possibility that the microbiome – the range and number of bacteria living in the gut – might help treat mental illness has become a focus of intense research in recent years, especially at the APC Microbiome research centre at University College Cork.

To explore this further, the UK researchers examined studies between 2003 and 2019, which looked at potential therapeutic contribution of prebiotics and probiotics in adults with depression and/or anxiety disorders.

Probiotic supplements either alone or in combination with prebiotics may be linked to “measurable reductions in depression”. All showed a significant fall or improvement in anxiety symptoms and/or clinically-relevant changes in biochemical measures of anxiety and/or depression with probiotic or combined prebiotic and probiotic use.

The researchers stressed the studies were over a short period with a low number of participants. “This makes it difficult to draw any firm conclusions about the overall effects, whether they are long lasting, and whether there might be any unwanted side effects associated with prolonged use.”

How do probiotics act?

The results also needed to be applied in larger test populations, said Prof John Cryan of APC Microbiome, who with his colleague psychiatrist Prof Ted Dinan coined the term “psychobiotics”.

Probiotics may help reduce production of inflammatory chemicals, such as cytokines, as is the case in inflammatory bowel disease. Or they may help direct the action of tryptophan, an amino acid thought to be important in the gut-brain axis where psychiatric disorders occur.

The latest review reinforced the potential of microbe-based treatments of neuropsychiatric disorders attributable to diseases of the nervous system, according to Prof Cryan. However, he stressed a way of treating brain disease and mental illness “through the gut biome” was some time off.

Much work needed to be done on the biological mechanisms involved and to see how they affected brain function. Researchers were “in a hopeful place”, however, as there were definite effects, he said.