Q&A: How close are we to having a Covid-19 vaccine? 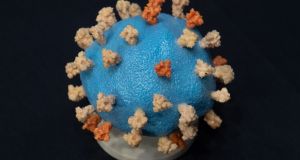 A model of Covid-19, known as coronavirus, is seen ahead during a US Senate Appropriations subcommittee hearing on the plan to research, manufacture and distribute a coronavirus vaccine. Photograph: Saul Loeb-Pool/Getty Images

The remarkable global effort to produce a range of Covid-19 vaccines in parallel with developing new treatments – many of which are adapting proven medications for other diseases – is gathering pace.

The scale of scientific endeavour is unprecedented, not just in terms of finding a new vaccine, but in the level of co-operation between scientists; in quickly sharing results, data and critical genetic details; indications of variations in the form of what is known as SARS-CoV-2. Then there is verification of the work of others, enabling promising work to push on.

That is the reassuring bit. It heightens the chances of success on both vaccine and antiviral fronts. A rough assessment of timings on potential vaccines would suggest early optimism needs to be tempered and early 2021 is the most likely time one will become available - and only then to some countries.

The realists among the ranks of virologists, immunologists and vaccine developers, who are familiar with all too frequent experience of failure, would say all this is very much on the optimistic side.

Trinity College Dublin immunologist Prof Luke O’Neill always refers to a horse racing metaphor; you may be leading the Grand National and have just one fence to clear, and fall at the last hurdle.

The world also has to face up to the fact that there may never be an effective vaccine. But he is quick to add that the ability to contain the novel virus through a combination of therapies is very likely – as was the case with Aids. Likewise, there are already treatments emerging that will act as a bridge to getting a vaccine in place.

The one discordant note undermining this tremendous team play is wealthy countries buying up treatments, as seen with the US recently purchasing all the next three months’ projected production of the drug remdesivir from US manufacturer Gilead – it cuts recovery times, though it is not yet clear if the drug improves survival rates.

There remains the risk that more wealthy countries aligned to powerful pharma companies will do the same when a vaccine emerges, and national interests will dominate over the need to give it to those requiring it most.

That being said, and acknowledging the case for doing things differently, there are other strategies being born out of desperation – in the form of 10 million cases and 500,000 fatalities and no indication of peak – that are likely to counter that threat.

What is the emerging picture on leading vaccine candidates?

There are more than 145 candidate vaccines in development, with 17 in human trials. Some have been shown to generate a strong immune response in animals.

Those conducting vaccine trials are “chasing the disease around the world”, notably in Brazil and the US. Places where there are high levels of Covid-19 are the best to test efficacy and safety.

The extent of that research is likely to mean a range of vaccines of differing type and effectiveness will emerge – the first to come on stream might not be the magic bullet hoped for. But, given the whole world will need protection, a variety of vaccines from different sources is not such a bad thing.

Johnson & Johnson has indicated, for example, its vaccine appeared so promising in preclinical studies they were able to push up the start for testing in healthy volunteers to later this month.

The vaccine uses a common-cold virus to deliver a coronavirus antigen into cells to stimulate the immune system to fight off an infection. This type of “vector” using weakened virus is already proven effective and safe in 65,000 humans.

Its chief scientific officer Dr Paul Stoffels outlined to BBC Radio 4’s Today programme this week how the clinical trial process is being accelerated in the case of Covid-19 with elements run in parallel, while drug companies are already scaling up manufacture of the vaccine to have it ready in the quickest possible time - much different to traditional approaches of the past.

If one element fails, all others are then stopped, he confirmed. The vaccine is already in production in the US and Europe with a view to 1 billion doses being available early next year.

Meanwhile, the US government is spending billions of dollars in supporting the five best candidates in the hope of having the best one available in the shortest possible time.

Oxford University is regarded as making most progress, and “offers the best chance of having something protective against the virus as we go into winter”, MPs have been told.

It is being tested in Brazil and South Africa, where the case numbers are high. Astra Zeneca, the company partnering with Oxford, is to start a trial with 30,000 people in the US. European countries are lining up behind this project.

BioNTech’s vaccine, being developed with Pfizer in Germany, has confirmed positive trial results, generating immune defences in participants that were stronger than those of the average recovered Covid-19 patient. It uses messenger RNA (mRNA) technology, which is faster than traditional methods.

Moderna’s mRNA vaccine trial in the US showed participants developed similar levels of immunity to recovered coronavirus patients, with only minor side effects. Rather than using pathogens to induce an immune response, mRNA vaccines use genetic material that carries instructions for cells to produce proteins that fight disease. However, no marketable mRNA vaccine has been produced to date.

China is using a vaccine developed with CanSino Biologics on army personnel though little is known about the type of vaccine involved and extent of deployment.

All these factors confirm great progress but there is no clarity on timelines, which underlines the importance of having treatments in the meantime. Uncertainty over the extent to which having the disease confers immunity and protection against re-infection is an added complication pointing to the acute need for Covid medications/therapies.

So what are the promising treatments?

Fortunately, the process of finding new treatments is quicker with lower regulatory hurdles to clear, though it has to be said a widely available medication approved for routine use has not materialised yet.

Numerous trials are in progress with prompt endorsement of effectiveness or rejection. There has been too much haste on occasion, as in the case of hydroxychloroquine, though some trials are continuing to use this anti-malaria drug and some recent results are more positive.

Early indications on dexamethasone – a cheap steroid – suggest it reduced deaths by one-third in patients on a ventilator. A run on dexamethasone ensued as physicians quickly made it part of their standard of care for the sickest patients. This drug, however, looks to be only effective in patients already in a critical state.

Remdesivir reduces the duration of infection in hospitalised patients but not mortality. It does not come cheap, costing $2,340 (€2,080) per treatment in the US.

Other drugs such as daclatasvir, used to treat Hepatitis C; imatinib to treat leukaemia and favipiravir to treat influenza are showing promise. “Cocktails” of these drugs could be deployed as they are no longer patented, meaning they would be easily and cheaply made available.

A long-established therapy using “convalescent plasma”, in this instance made from antibodies from people who have had Covid-19, continues to show promise, and it can be manufactured in a laboratory.

Likewise, T cells may be sufficient to control infection in the absence of antibodies. T cell responses have been detected in most Covid-19 patients, and first-in-human vaccine trials have reported potent T cell activation. It is possible that T cells’ memory of Sars-CoV-2 may last longer than antibodies.

There is also significant work being done on monoclonal antibodies which mimic natural antibodies and can be isolated and manufactured in large quantities to treat patients.

When it comes to vaccines, was there adequate preparedness for a pandemic?

For scientists and doctors who have had to wrestle with the rapid spread of Covid-19 across the world, it is a game of constant catch-up. The insidious nature of the novel virus compounds their difficulties. The picture is incomplete. That said, on a daily basis revealing details emerge so the medical response is being constantly perfected.

The bottom line as of now, however, is a safe and effective vaccine remains the best way to achieve herd immunity on a global scale. The lessons for future preparedness are clear.

Immunologist Sir John Bell of Oxford University has criticised the lack of pandemic planning in the UK and particularly the absence of manufacturing capacity for vaccines. It is, however, a global problem that will have to be addressed through sustained funding over many years.

This pandemic was “not a one-off” that would not recur for centuries, he told a House of Commons committee.

That warning was echoed by Dr Stoffels who outlined the need to have a range of vaccines in place, especially in relation to coronaviruses like Covid-19 and flu, before outbreaks lead to a difficult-to-control pandemic.