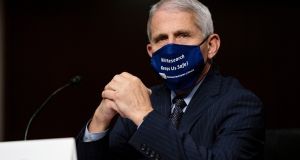 Dr Anthony Fauci, director of the National Institute of Allergy and Infectious Diseases, at the Senate Health, Education, Labor, and Pensions Committee in Washington this week. Photograph: Alex Edelman/Pool via The New York Times

America’s most prominent scientist in combating Covid-19, Dr Anthony Fauci, has said he enjoys a good personal relationship with President Donald Trump despite well-aired tensions between the two throughout the pandemic.

Dr Fauci refused to comment on Mr Trump’s recent self-approval of his handling of the crisis in which he awarded himself an A+, but said the death and infection rate of the disease in his country was “sobering”.

“As a health person, my relationship with the president I believe is a good relationship,” he said in an interview on RTÉ’s Late Late Show on Friday night.

He said, despite well-publicised disagreements with Mr Trump, “as a personal relationship, it is not a bad relationship at all; it’s a good relationship”.

“There has been some tension there because I have been having to say things from a public health and scientific standpoint that were at odds with what the president was saying.”

In fact, the often fraught relationship between the two men has long fascinated American TV audiences – the country’s leading authority on infectious diseases pitted against a divisive president many believe has botched the country’s effort to control the spread of Covid-19.

Dr Fauci said he met Mr Trump and his officials less frequently in recent times as the administration had pivoted towards focusing on the economy.

As for the president’s barbed tweets, he said they were a “part of the game” he did not take personally.

“You just have to tell the truth, go by the science and be driven and read by scientific data and evidence. There’s conflict with people, you just don’t take it personally.”

His time combatting the coronavirus has antagonised some and even led to physical threats against him and his family. Last month, he spoke about how his daughters had been harassed due to statements he had made on public health policy.

He continues to place the threat of the virus in stark terms.

“You have public health officials like myself who keep saying wear masks, [keep] physical distancing, avoid crowds, as if that were somehow an affront to some people,” he said. “That we were either encroaching upon their individual rights or we were not sensitive to the impact that this has on the economy, neither of which was true.

“The enemy is the virus . . . the best way to get the economy back is to control the virus.”

However, despite a global public increasingly fatigued by lockdown and other social restrictions, he did see some hope in the development of vaccines, many of which, he noted, are now in phase three trials.

“We should know by the end of this calendar year – let’s say November, December – whether we have a safe and effective vaccine that can then be started to be deployed,” he said.

“Once we get vaccines distributed in the population – we won’t be completely avoiding and not adhering to public health measures – but clearly they will be much less restrictive.

“Vaccines are going to make things much more amenable to approaching some sort of normality in society.”