Locals brace for restrictions and admit standards slipped: ‘Everyone got very casual’ 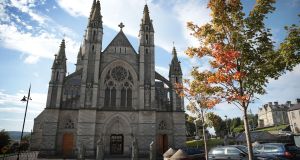 St Eunan’s Cathedral in Letterkenny: With Level 3 restrictions coming into play, many made the most of the last opportunity to go to Mass. Photograph: Declan Doherty

For a Friday morning, St Eunan’s Cathedral in Letterkenny is unusually busy. There is 10am Mass, then a Baptism, and two primary school classes making their First Holy Communion. “It’s like Custer’s Last Stand in here,” remarks one parishioner.

As of midnight, the cathedral closes for all but private prayer as the county moves to Level 3 of the Government’s plan for living with Covid-19 to combat the high levels of the virus in Donegal; among other measures, it means a ban on social and family gatherings, fresh restrictions for the hospitality industry, and a ban on travel into and out of the county, though with an exception for work, education or other essential purposes.

On the cathedral steps on Friday, Charlene Murray and Sunil Kumar pose briefly for a photograph before rushing inside so as not to miss their allocated time for their daughter Alaya’s Baptism.

“We thought it would be cancelled, but we got a message last night to say it could go ahead,” explains Murray. “We wanted to get her baptised while we could still do it.”

For others, it is about making the most of the last opportunity to go to Mass. “My outlet will be beach walks,” says one elderly parishioner. She admits to feeling “very upset” about the Level 3 restrictions, but emphasises “we have to do it, for the good of the country.

The charge of failing to follow the rules is laid, variously, against 'staycationers' from the South, northerners and young people

“We have been very good here, social distancing has been kept up, but I do think that to a certain degree standards have slipped.”

“Everyone got very casual about it, you could see them out and about,” says another Mass-goer, Dorothy Maguire, who adds that the people who had stuck by the rules already in place are “seriously worried. Now the [new] restrictions are in place, we need compliance from the rest.”

In the town centre, that charge of failing to follow the rules is laid, variously, against “staycationers” from the South, northerners – rates are as high across the Border in Derry and Strabane – and young people.

Also blamed are house parties and social gatherings such as birthday parties and wakes, premises which have failed to implement the guidelines and simple fatigue, not least in a county which previously experienced low levels of the virus.

Blaming young people, she says, is unfair. “It’s everybody, not just young people. I’m trying to abide by the rules, but I work in a shop, and there are old people come in without masks and they’re coughing, but because they’re vulnerable nobody says anything.”

“People talk about northeners,” adds another woman, “but so much of our business comes from the North. We need them.”

At Dillon’s Hotel on the main street, the general manager, Robert McElhinney, is studying his staff rotas. “There are going to be at least 20 staff that I have no work for, for three weeks.”

It’s very disheartening, it’s an awful kick in the teeth

Since the move to the Level 3 restrictions was announced, “the phone has been going fairly steadily” with cancellations. “It’s very hard to say anything positive,” says McElhinney. “I really didn’t think I’d be doing this again so soon.”

The hotel will remain open, but approximately half of their bookings have been cancelled and for the next three weeks they can serve only residents; he questions the logic of this, not least given the safety measures the hotel has put in place, and says that though the support announced by the Government is welcome, more must be done: “It isn’t going to replace the business lost in the next three days, never mind the next three weeks.

“There is a question mark over the long-term viability of people’s businesses right now. We’re not even in October, but it feels like the middle of November. Our summer really starts at the end of April, and right now that feels like 10 years away.”

“We are paying the penalty for other people’s carelessness and complacency,” said Jimmy Kennedy of the Brewery Bar.

“People got complacent, forgot to do the things they should be doing and, as a result, everybody suffers.” As staff prepared on Friday to serve their final carvery lunch before closing up at midnight for three weeks, Kennedy filled out his application for the Covid payment.

“We have about 26 full-time staff and everybody’s going back on the Covid payment, and everybody has bills to pay and mortgages and kids,” he said. “It’s very disheartening, it’s an awful kick in the teeth.”

Extra Government help will be needed “to get us back on our feet”; what is currently on offer “will help, but it’s hard to beat regular business”.

Yet for all that, he remains hopeful. “It is a body blow, but we’ve been down this road once . . . I think we can get back to a level which will keep everybody safe in here and be quite confident we can do some business.”