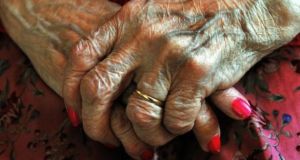 The HSE dropped legal actions against the State’s health regulator shortly after The Irish Times reported on them. File photograph: John Stillwell/PA Wire

The HSE has dropped legal actions against the State’s health regulator over directions to restrict the number of residents at two of its long-term care facilities in Co Cork.

The health service took District Court proceedings against the Health and Information Quality Authority (Hiqa) over restrictions at Clonakilty and Midleton community hospitals earlier this year but the cases were dropped shortly after The Irish Times reported on them.

The HSE said it will temporarily reduce occupancy numbers at the two facilities as it moves to a situation where it will have no more than four residents share any room.

Hiqa has repeatedly pushed the HSE to reduce the number of multi-occupancy rooms at the 122-bed Clonakilty facility and 50-bed Midleton home over recent years.

The HSE had sought the Midleton facility to be reduced by just three beds after raising concerns about the numbers of residents living in large multi-occupancy rooms.

Both facilities, built in the 19th century, were on a list of 19 publicly-run community and nursing home facilities listed as “centres of concern” for infection control by Hiqa at the start of the coronavirus pandemic and deemed “high risk” due to multi-room occupancy.

The cases taken against the State watchdog at the HSE-run care facilities for older people were listed in the Bandon and Mallow District Courts respectively during the summer.

The legal action over the Clonakilty facility was initiated prior to the coronavirus pandemic that has resulted in the deaths of 10 people at the west Co Cork care home.

The HSE told Hiqa that the patients in the unit had dementia and it had not been possible to accommodate them appropriately elsewhere while maintaining infection control.

A spokeswoman for the HSE’s community healthcare division in Cork and Kerry told The Irish Times the health service would temporarily reduce the occupancy levels at both community hospitals over the coming months.

The reduced occupancy would “allow us to continue the important measures needed to stop the spread of Covid-19”, said the spokeswoman.

“It will allow us to provide the best possible environment for our current residents as we move to a situation whereby no more than four residents share any room.”

The spokeswoman said all current residents at both community hospitals would remain in their homes while the changes were being made and their accommodation would be “as comfortable as possible”, even working within the constraints of older buildings.

“Ambitious building projects are in train for both facilities and we will be in a position to increase bed numbers again at both community hospitals once these are completed,” said the HSE spokeswoman.

In 2016, then minister for health Simon Harris signed a statutory instrument delaying Hiqa’s requirement until 2021 that 80 per cent of a care home’s rooms be single occupancy.

The Department of Health told the Oireachtas Covid-19 committee in June that it would be difficult for care homes to meet even this revised target given the impact of the virus.